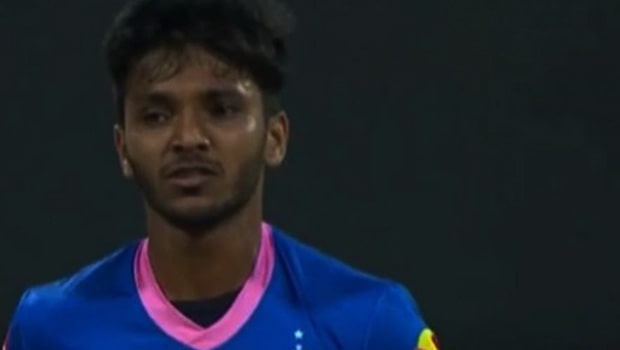 Former Indian opening batsman Virender Sehwag has heaped praise on Rajasthan Royals’ youngster Chetan Sakariya, who made an impressive debut in the Indian Premier League against Punjab Kings at the Wankhede Stadium, Mumbai on Monday.

Sakariya, who has gone through a tough phase in his life in the recent past, was at his absolute best as he returned with figures of 3-31 in his four-overs quota. The left-arm pacer bowled with an impressive economy rate of 7.80 when the opposition scored 221 runs and almost all the bowlers took a beating.

The left-arm pacer displayed a good range of slower balls, yorkers, and back of the hand delivery, which flummoxed the PBKS batters. Sakariya wasn’t afraid to go for runs and he made Sehwag reminisce his former teammates – Zaheer Khan and Ashish Nehra.

“I’ve heard his name, even saw him bowl in domestic games but didn’t expect that he would bowl so well. You face different batters in the domestic circuit, but in IPL, you come across big and renowned batsmen. We got to see his temperament. He was fearless. Zaheer Khan and Ashish Nehra always say that as a bowler, you should never be scared of getting hit for a boundary. Until you won’t get hit, you cannot learn and pick wickets. So, I think, he [Sakariya] exhibited that kind of temperament.”

Sakariya dismissed Mayank Agarwal, KL Rahul, and Jhye Richardson. In fact, the 22-year old from Bhavnagar conceded only five runs in his final over after conceding a boundary against KL Rahul. However, his efforts went in vain as RR lost the game by four runs.

“He had variations as well. Though there were a few no-balls overall, he bowled very well. The way he got Mayank Agarwal and surprised Chris Gayle with one of his deliveries, he was completely impressive,” the former India batsman added.

Consequently, Sakariya must have grown in confidence after making an impressive start to his IPL career. It is never easy for young players to straight away impress on a big stage like the IPL however the rookie bowler was able to grab his opportunity with both hands.

The youngster was bagged for INR 1.2 crores by Rajasthan Royals and he looks like one of the uncapped Indian bowlers to look out for. Rajasthan Royals will play their next match against Delhi Capitals at the Wankhede Stadium, Mumbai on 15th April.