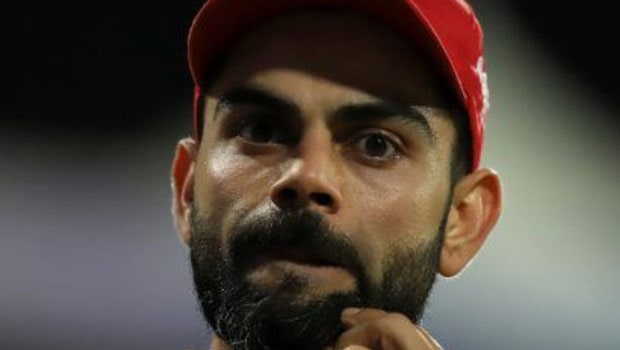 Royal Challengers Bangalore captain Virat Kohli has heaped praise on AB de Villiers after the South African smashed 75 runs off just 42 balls to help his team propel to 171-5 against Delhi Capitals at the Narendra Modi Stadium, Ahmedabad on Tuesday. Kohli stated that it doesn’t feel like AB de Villiers has retired from International cricket as he is playing at the top of his game.

RCB were in a spot of bother as they lost three wickets for 60 runs inside nine overs. However, AB was able to turn the tables as he timed the ball to perfection. The Proteas star brought his fifty off just 34 balls and then changed gears like a superfast car.

AB smashed three sixes in the final over bowled by Marcus Stoinis and took 23 runs of the last over to help his team go past the 170-run mark. In fact, at one stage it looked like RCB would struggle to go past 150 runs but AB de Villiers turned the match on its head with his blistering batting.

On the other hand, AB de Villiers also became the sixth batsman to score 5000 runs and the second overseas player to get to the milestone. Interestingly, AB became the first player to score 5000 IPL runs with a strike rate of more than 150.

Virat Kohli said in the post-match presentation, “AB doesn’t like me saying this, but he hasn’t played competitive cricket for 5 months, but if you look at him bat it doesn’t feel like he doesn’t play international cricket anymore. Hats off to him, keeps doing it again and again for us. Such an asset for us. I’ll say this again (smiles). He hasn’t played for five months, just watch that innings”.

Meanwhile, Kohli also praised Mohammed Siraj who was able to defend 14 runs in the final over. Siraj bowled accurately and was able to nail the yorkers. Thus, RCB won the thrilling contest by just one run.

Kohli added, “At one stage I thought it was getting away, but Siraj’s final over gave us confidence and we thought he would manage a professional and clinical job. If there weren’t fielding lapses it wasn’t going to go this far anyway. We lost wickets but AB went berserk and then in the last few overs while bowling Hetmyer got hold of a few, otherwise we were in control”.

RCB will next face Punjab Kings at the same venue on 30th April.