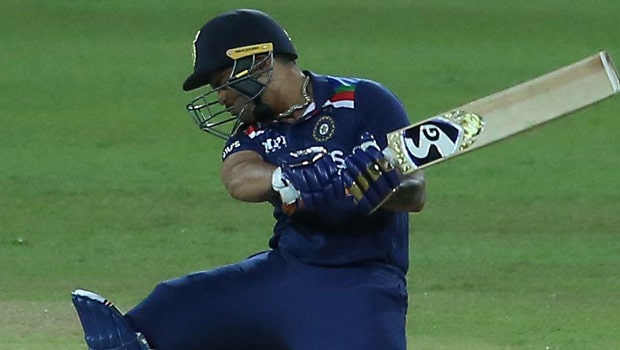 Mumbai Indians’ Ishan Kishan looked plenty like his old self as he hit a swashbuckling half-century off just 25 deliveries to take his side past the finishing line as quickly as possible. Against Rajasthan Royals, the defending champions not only required a win, they needed to get to victory with as big a margin as possible in order to improve their Net Run Rate as the race for the playoff goes on!

Ishan Kishan’s knock last night was a return to form for the 23-year-old after a dry spell of eight disappointing innings. He notched up his first 50 of the season and his innings also helped MI get to the target in just 8.2 overs. Kishan, who opened the batting with Rohit Sharma in place of Quinton de Kock, smashed five boundaries and three sixes!

“It’s nice to be back opening and getting runs for the team and making sure that we win by a big margin. It’s a very good feeling as it was much-needed for our team to get momentum again,” said Ishan Kishan in the post-match interview.

The 23-year-old also talked about the challenge of going through a lean patch where the runs weren’t flowing through his bat. Ishan credited players like Virat Kohli, Hardik Pandya, and Kieron Pollard and conversations with them helped him immensely to regain his confidence. He tried to keep things as simple as possible and that paid off in the match against RR.

“I feel ups and downs are a big part of any sportsman. I was also not in good shape. Most of our batters were not getting runs like in previous seasons. We had great support staff. Our captain [Rohit Sharma] too. In fact, I chatted with Virat bhai and Hardik bhai, and everyone was there to support me.

“I had a chat with KP (Pollard), who said you just need to keep things simple, bat the way you used to do, watch the videos of what you did in the last season. I watched a few videos of my batting, and that gave me a bit of confidence.”

Mumbai Indians are involved in a heated qualification race along with Kolkata Knight Riders. In the last league stage of IPL 2021, MI will take on bottom-placed Sunrisers Hyderabad while KKR go head-to-head against Rajasthan Royals. Not only will victories and losses matter, but the margins and the Net Run Rate factor will also play a decisive role.

“There is talk of us wanting KKR to lose the next game and us winning our next game (smiles), but that is way ahead now. We just have to prepare for our next game. We need to play with the same energy today. Looking forward to doing this again in the next game,” said Ishan Kishan, who will be expected to open and don gloves in MI’s final league match.