Home » Cricket » IPL 2021: It was challenging to bowl with dew coming in – Varun Chakravarthy

IPL 2021: It was challenging to bowl with dew coming in – Varun Chakravarthy 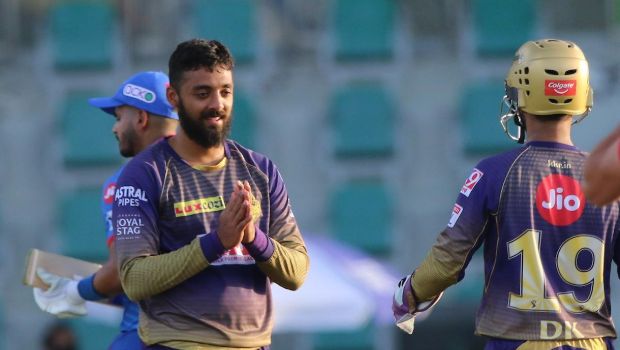 Kolkata Knight Riders mystery spinner Varun Chakravarthy believes it was challenging to bowl with dew coming into the ground against Punjab Kings at the Narendra Modi Stadium, Ahmedabad on Monday.

Chakravarthy has done a fine job for KKR in the ongoing season as he has scalped seven wickets in the six matches he has played.

Furthermore, the spinner from Tamil Nadu has conceded his runs at an impressive economy rate of 7.29. Chakravarthy bowled another good spell against PBKS as he scalped the crucial wicket of Nicholas Pooran and conceded only 24 runs in his quota of four overs.

The right-arm spinner has a plethora of variations under his belt and he uses all of them with guile. Chakravarthy is not a big turner of the ball but he keeps his line and length accurate to trouble the opposition batsman.

The KKR spinner said at the mid-innings break, “The pitch is definitely keeping a low. That’s how it started and it didn’t come on well to the bat but during the last ten overs, the dew really started setting in and there was a lot of dew.

“It was really tough to grip the ball and few balls were slipping and we had to dry each and every ball,” he added.

Varun added that he makes sure he completely dries the ball before bowling but the conditions were challenging.

“Not really. I make sure I dry the ball so that I can get a grip and bowl anything I want. But still, sometimes, it does play in the mind that there’s too much dew on the ball and it’s slippery. Sometimes, it can slip out.”

On the other hand, Chakravarthy added that he is working on the new mystery aspect of his bowling but he will need a dryer ball to execute it.

“I’m working on it but let’s see, if the conditions help me out, I will use it. I need a dry ball for that [laughs].”

KKR will aim to build upon the win and continue their good show in the coming matches. The Eoin Morgan-led team will next face DC at the same venue on 29th April.