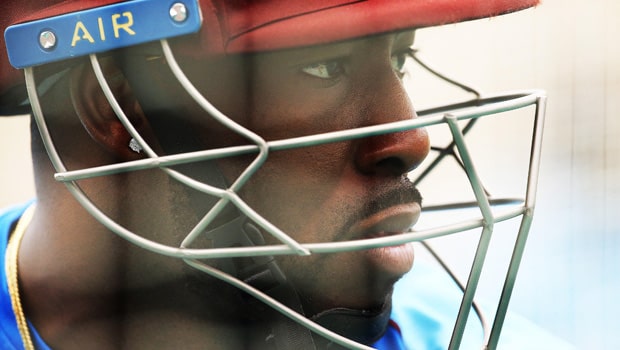 Kolkata Knight Riders talisman all-rounder Andre Russell revealed his strategy while bowling to Royal Challengers Bangalore’s AB de Villiers at the Sheikh Zayed Stadium, Abu Dhabi on Monday. Russell bowled an accurate yorker on the very first ball and got the big wicket to push RCB on the backfoot.

The former South African skipper was late on the ball and it ricocheted off his pads onto the stumps. Russell had also bent his back and reaped rewards for the same. The all-rounder also got the wickets of Srikar Bharat and Mohammed Siraj and returned with impressive figures of 3-9 in his three overs.

Varun Chakravarthy also impressed as he picked 3-13 in his four overs as KKR were able to bundle RCB at their fifth lowest IPL total at 92 runs. Thus, Russell played a key role for his team and he was the pick of the bowlers along with Varun Chakravarthy.

Russell added that AB was not expecting the yorker on the first ball he faced and he was able to surprise the talisman batsman.

“Yes, naturally I planned that yorker because before that I was bowling a lot of length balls. I know AB is a clever guy. I was just trying to outsmart him and get it right. It happened,” Russell said while interacting with Varun Chakravarthy for BCCI.

“The last time he took us apart in Chennai. This time, I planned to get him out. First-ball yorker and it happened. I backed myself,” he added. “He wasn’t (expecting the yorker).”

On the other hand, Russell asked Chakravarthy why he doesn’t celebrate his wickets. The mystery spinner answered that he wants to stay focussed and not veer off the track in excitement.

“I want 24 wickets in a match (laughs). It’s just that I want to stay focused and not get distracted. If I celebrate too much, I will end up losing focus on what I need to do next. But later on, I do celebrate,” he said.

KKR will next face MI at the same venue on Thursday.