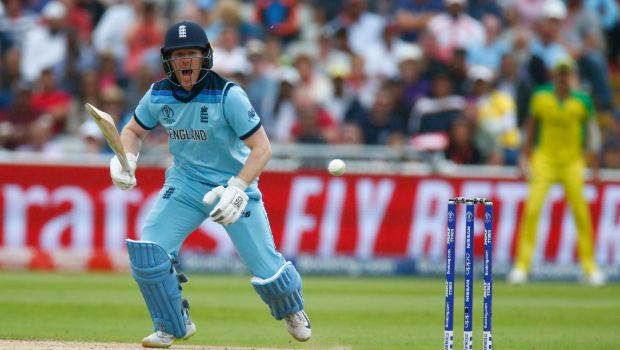 Kolkata Knight Riders captain Eoin Morgan has admitted that Royal Challengers Bangalore got too many runs against them at the MA Chidambaram Stadium, Stadium on Sunday.

After electing to bat first, the Virat Kohli-led team posted an above par score of 204 runs after brilliant fifties from Glenn Maxwell and AB de Villiers.

In fact, RCB didn’t get off to a good start as they lost two wickets in the second over, bowled by Varun Chakravarthy. However, Glenn Maxwell was able to hit the ground running and continued his good form. Maxwell batted at the top of his game and completed his fifty off just 28 balls.

On the other hand, AB de Villiers had a perfect platform to catapult his attack as he came to the crease with nine overs to spare. The Proteas star was at his best as he played some breathtaking shots. The right-hander reached his fifty off just 27 balls as he batted at the top of his game.

RCB scored 70 runs off their last five overs, out of which 55 were scored by AB. It wasn’t the easiest of pitches but Glenn Maxwell and AB de Villiers’ masterclass took RCB past 200.

Morgan said in the post-match presentation, “Yeah, evidently so. The wicket did play better than we thought it was going to. It was RCB’s day with the bat, they made use of any tiny errors with the ball. But I can’t fault our efforts. We gave it absolutely everything in the field today. Tried our best in the chase but not to be. It (Chepauk pitch) certainly stumped me. I’m glad to be leaving Chennai. Turned out to be a great cricket wicket. As I said before, RCB’s batting today was just too good for us”.

Morgan added that Maxwell and AB de Villiers are world-class players and they took the game away from them. Maxwell scored 78 off just 49 balls whereas AB was at his destructive best as he scored 76 from 34 to put on a masterpiece at Chepauk.

Morgan added, “Maxwell is a destructive player but he isn’t their only star player. You do need an over or two up your sleeve for someone like De Villiers. They are full of strength and depth. Every side in the competition is. So you can’t plan for just one player. We struggled to kick on (in the chase) and got to a stage where only Russell could get us going. He’s done it a few times before but today, RCB’s bowling was too good”.

KKR will now move to Mumbai, where they will face Chennai Super Kings on 21st April.