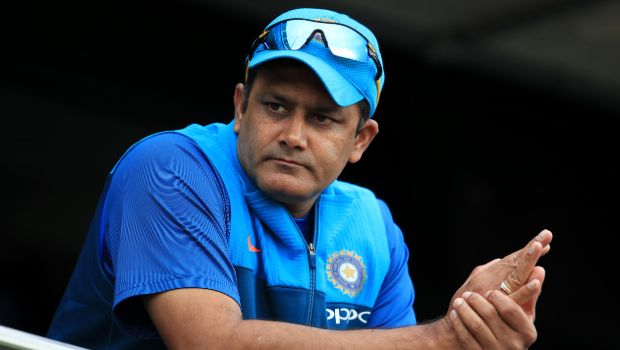 The West Indies batsman is a clean striker of the ball and he is one of the hardest hitters in the game. Similarly, Shahrukh Khan has impressed with his pyrotechnics. The right-hander from Tamil Nadu has done a fine job for his state in the domestic circuit.

The 25-year old was roped in for INR 5.25 crores in IPL 2021 auction by Punjab Kings. The right-hander scored 88 runs in four innings in the Syed Mushtaq Ali Trophy 2021 edition at an average of 88 and a strike rate of 220 and thus played an instrumental role in helping Tamil Nadu lift the title.

Kumble revealed that he doesn’t bowl to Shahrukh Khan in the nets.

“He (Shahrukh ) reminds me a bit of Pollard actually. When I was with Mumbai Indians, Pollard in the nets was dangerous. I used to bowl a bit (in the nets), and the first thing I used to tell him was don’t hit straight,” Kumble said in a video shared by PBKS on their official Twitter handle.

“Here I’m not even trying. I’m a lot older now, and the body doesn’t take the bowling anymore. So, I’m not going to bowl at Shahrukh, for sure,” he added.

On the other hand, Shahrukh Khan is looking forward to giving his best while playing for PBKS in the IPL. The Mohali-based franchise had failed to qualify for the playoff stages in the previous season and Khan will aim to deliver the goods for the team.

“Really excited and looking forward to IPL. I have waited for this opportunity to come and now it is time to work hard and help Punjab Kings win matches. I can’t wait to share the dressing room and the field with some of the biggest names in world cricket and I am sure I will learn a lot from everyone involved in the team,” Shahrukh had told WION in an interview.

Masood Shahrukh Khan has scored 293 runs in 31 T20 matches at an average of 18.31 and he will aim to be at the top of his game in the upcoming season.

Punjab Kings will begin their IPL 2021 campaign against Rajasthan Royals at the Wankhede Stadium, Mumbai on 12th April.