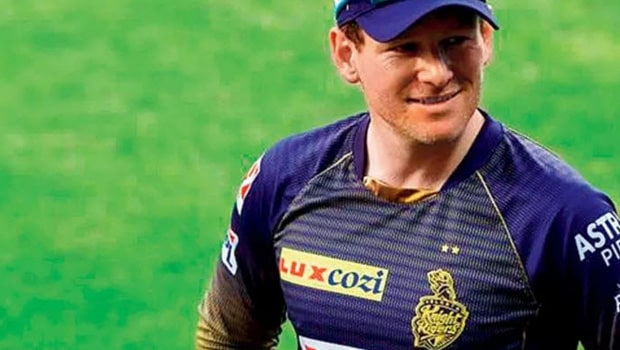 Kolkata Knight Riders captain Eoin Morgan is proud that his team reached 202 after they were reeling at 31-5 at one stage against Chennai Super Kings at Wankhede Stadium, Mumbai on Wednesday. KKR found themselves behind the eighth-ball as they lost the top five batsmen inside the powerplay overs while chasing a big target of 221 runs.

However, Andre Russell and Dinesh Karthik were able to keep their team in the contest. Russell was able to hit the ground running as he launched his attack as soon as he came to the crease. The power-hitter scored 54 runs off 22 balls to keep the required run-rate under reach.

After Russell’s dismissal, Karthik took the mantle and played aggressively. The wicket-keeper batsman scored 24-ball 40 to keep KKR hopes alive. At 146-7, it seemed the match was done and dusted but another twist in the tale was left as Pat Cummins bludgeoned 66 runs from 34 balls to give a glimmer of hope to KKR.

Cummins took the CSK bowlers to the cleaners, especially Shardul Thakur and Sam Curran, smashing the latter for 30 runs in an over. However, CSK were able to keep their nerves in the end and got over the line by 18 runs.

Eoin Morgan said, ” I wasn’t worried about the net run rate (when we lost early wickets),” he stressed.

“When you are five down, you are bothered about the result of the game and try and find a solution to try and put yourself in a winning position. Dinesh Karthik and Andre Russell did that. Their partnership did turn the momentum and the fortune our way, considering the really bad start we had.

“The whole of the innings, we were up with where CSK were in the position in the first innings. But, those five mistakes earlier did cost us. We have to be proud of getting so close and putting ourselves in the winning position.”

On the other hand, KKR were sloppy in the field and the fielders didn’t support their bowlers. Morgan feels the team could have been chasing a target of around 200 runs if their fielders had not made the errors.

Morgan added, “Three no balls and a fielding performance that didn’t aid our bowlers in any way. We could have been chasing a score that would have been down from 200-plus to 180. Today, after reflection, I think our bowlers did a reasonable job,” he said.

“Where we were after the powerplay and only falling short by 20 runs, you don’t have to be an optimist to think that we would have been in a really good position if we have batted better at the top of the order.”

KKR will next face Punjab Kings on 24th April at the same venue of Wankhede Stadium.