Home » Cricket » IPL 2021 | “We knew we had some special bowlers,” Sanju Samson on that incredible thrilling win over Punjab Kings

IPL 2021 | “We knew we had some special bowlers,” Sanju Samson on that incredible thrilling win over Punjab Kings 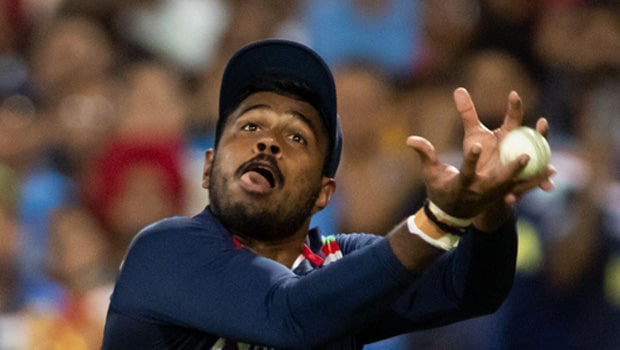 The wheel of the Indian Premier League continues to produce masterclass after masterclass. The match between Punjab Kings and Rajasthan Royals was one of the highest order. Depending on which side of the camp you’re on, you were either pulled from the depths of misery into the adrenaline run of a fantastic win or put into despair from a position of comfort.

Punjab Kings needed just 10 runs off the final 15 deliveries to win the match. They had arrived at that position on the back of a wonderful opening partnership featuring KL Rahul and Mayank Agarwal. Earlier in the game, Mohammad Shami and Arshdeep Singh had ran riot with the ball with the latter picking up five wickets.

However, Rajasthan Royals led by Mustafizur Rahman and Kartik Tyagi staged a brilliant comeback in the final two overs to deny Punjab the win. Tyagi famously defended four runs in the final over to seal a magnificent victory and captain Sanju Samson was extremely proud of the effort put in by his ‘special’ bowlers.

In the post-match press conference, the Rajasthan Royals captain said, “Somewhere we had that fight left. We knew we had some special bowlers. Kept Mustafizur’s overs for the end. Tyagi was confident with his yorkers, especially wide yorkers. Executed them well against the new batters. And we had top fielding plans for every batter, we have planned till the last batter.”

Chasing RR’s target of 186, KL Rahul and Mayank Agarwal had added 120 runs for the first wicket before Rahul was sent back to the pavilion just before he could complete his half-century. Even after Mayank Agarwal got out, Nicholas Pooran and Aiden Markram looked comfortable and carried on what seemed like a straightforward run-chase before Kartik Tyagi had the final laugh.

Having lost the toss, RR had batted first. Evin Lewis and Yashasvi Jaiswal gave them a strong opening before Mahipal Lomror launched into the Punjab bowling attack. His 43 off 17 balls helped Rajasthan get to a comfortable position. Although, at one point, a score of 200+ seemed extremely realistic, they ended up losing plenty of wickets and got cleaned up for 185 runs.

Although he had a poor outing with the bat, Sanju Samson felt that the total was always defendable. “We were happy with our score, on this wicket that was a good score. We are a better bowling and fielding team too. We could’ve won the game early if there weren’t drops early on,” Sanju Samson added.