IPL 2021: Will consult Bhuvneshwar Kumar when under pressure – T Natarajan 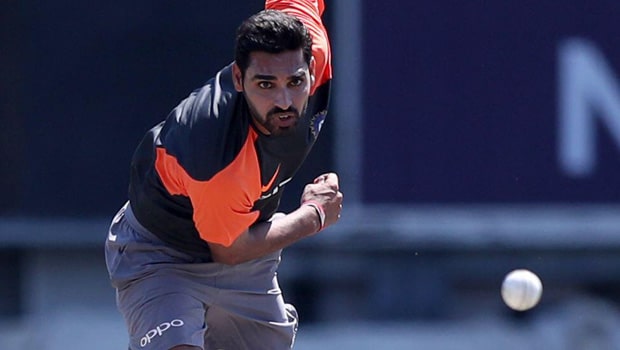 Sunrisers Hyderabad fast bowler T Natarajan has revealed that he will turn to his senior teammate Bhuvneshwar Kumar whenever he will be under pressure in the upcoming season of the Indian Premier League. Kumar has all the experience under his belt and he is regarded as one of the best white-ball bowlers in the world.

Kumar made an impressive comeback from injury in the recent limited over series against England. On the other hand, T Natarajan had hogged the limelight in the previous season of the league as he impressed with his adroitness to bowl in the death overs.

Natarajan was right on the money at the fag end of the innings and bowled accurate yorkers in IPL 2020. The left-arm pacer from Salem scalped 16 wickets in 16 matches and bowled with an impressive economy rate of 8.02. Thus, the impressive show in the IPL helped Natarajan break into the national team.

Subsequently, the fast bowler went on to make his debut in all three formats of the game for the Indian team. Natarajan scalped six wickets in three T20Is against Australia and finished as the leading wicket-taker of the series.

“I know I will have to do the job 100 percent. I will have to focus on not missing my length and have a clear plan for that scenario. If I miss my length, I am aware that I will be taken for runs. I have bowled under pressure in the past, so all of those experiences will help me this season. Bhuvi is back and in form, so he will share his thoughts when I’m under pressure,” Natarajan told ESPNcricinfo.

“Our team has good communication and it’s like a family. Even if I give runs, the team management backs me, so that gives me the confidence that I can come back. I’ve also never played an IPL game at Chepauk. I think Vijay Shankar has played IPL in Chennai, but this will be the first time for me in Chennai. I’ve played a lot of cricket at my home ground, so it will be nice to play in Chennai,” he added.

On the other hand, Natarajan also revealed that he had a lengthy chat with former Indian skipper MS Dhoni, whom he dismissed in the previous season. Dhoni advised Natarajan to keep mixing up his deliveries and the advice worked wonders for the fast bowler.

“I pitched one in the slot and he hit me for a big six – 102 meters or something. The next ball I got his wicket and didn’t celebrate. I was just thinking about that previous ball. After coming back to the dressing room, though, I was happy. After finishing the match, I also had a chat with him. Speaking to somebody like Dhoni itself is a big thing. He spoke to me about fitness and encouraged me, saying that I will keep getting better with experience. He said, use slow bouncers, cutters, and variations like that. It has been useful for me,” said Natarajan.

Natarajan has come up as one of the rising stars for the national team. Sunrisers Hyderabad will begin their IPL 2021 campaign against Kolkata Knight Riders at the MA Chidambaram Stadium, Chennai on 11th April.