Home » Cricket » Is there a better bowler in Women’s T20Is than Poonam Yadav?

Is there a better bowler in Women’s T20Is than Poonam Yadav? 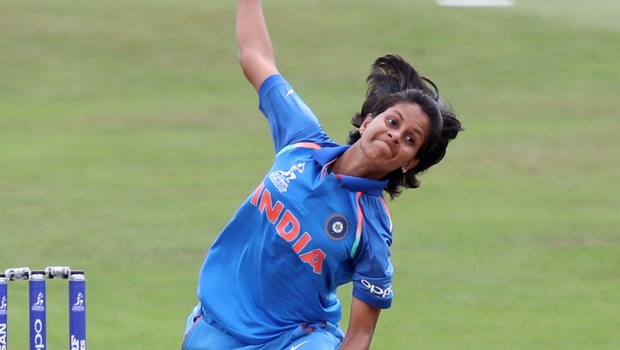 It was Deepti Sharma who stole the limelight in India’s first T20I against South Africa Women with a sensational bowling spell of 4-3-8-3. She bowled three consecutive maiden overs, two of which were wicket-maidens as well, thus, helping India Women to defend their paltry total of 130 runs. Deepti was rightly adjudged the Player-of-the-match for such a fantastic bowling spell as well.

However, there was another Indian bowler whose contribution went totally unnoticed in that victory. She is none other than Uttar Pradesh’s Wonder-Girl Poonam Yadav. In a spell of four overs, she gave away just 25 runs at an economy rate of 6.25 and also picked up the important wickets of two top order batters, Laura Wolvaardt and Sune Luus. Both her scalps came in the same over, on the fourth and fifth deliveries of the ninth over of the Proteas inning, and her twin strikes reduced the visitors to a score of 48/5.

South Africa could never recover since that over and, thus, fell short of the target by 11 runs. Just like this, the 28-year-old has made some equally impactful contributions to the Indian team ever since she made her debut in the format on April 5, 2013.

In fact, Poonam has been the highest wicket-taker in Women’s T20Is since her debut. She has taken 76 wickets in 55 matches at an excellent average of 14.71 and a strike-rate of 15.4. Her career economy of 5.70 screams loudly about her quality as a spinner. An economy rate of even 7.00 is considered to be fairly decent for bowlers in this format, so Poonam’s ability to bowl so tight is a luxury for any team to have.

Her bowling average is the second best among bowlers who have taken at least 50 wickets during this period. And each of her economy rate and strike-rate is the fourth best among the same category of bowlers in the same time-frame once again.

The most interesting part, however, is the difference between Poonam’s home and overseas records. Indian spinners traditionally have had a better record at home than in away conditions. Her tally of 25 wickets in home conditions at an average of 16.88, along with a strike-rate and economy rate of 17.0 and 5.94 respectively, is no fluke at all. But she has an even better record in overseas conditions. In 35 matches away from home, she has taken a total of 51 wickets at an outstanding average of 13.64 and an equally good strike-rate of 14.70.

Moreover, out of the 55 matches she has played so far, India have won 33 of them and she averages a fabulous 11.56 and strikes at a mindboggling interval of approximately 13 deliveries in those games. However, in the 20 matches that India has lost in her presence, she averages a mediocre 24.05 along with a middling strike-rate of 23.0. So, these numbers sum up how important her performances are to better India’s chances of victory in T20Is. checkout latest cricket news here.