Home » Cricket » Ishant Sharma 2.0 gears up for the Caribbean Challenge

Ishant Sharma 2.0 gears up for the Caribbean Challenge 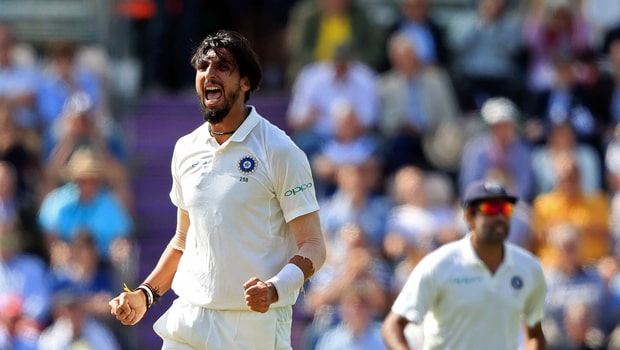 Ishant Sharma‘s Test career can be divided into two halves. The first half where a 19-year-old young Indian pacer, with immense potential, comes on to the international scene but never quite improves. And the second half where he starts reinventing himself as a bowler and finally succeeds in becoming a vital cog of the Indian pace attack.

The 31-year-old had the world at his feet when he first burst into the international scene. He had Ricky Ponting, one of the best batsmen the World has ever seen, all at sea against his pace and bounce, that too, on hard Australian decks which were very familiar to the batsman. The talent and potential was there to be seen in Ishant but that never translated into something significant for a long time ahead.

The first seven years of his career yielded a decent tally of 149 Test wickets but at an unimpressive average and strike-rate of 38.8 and 69.7 respectively. Such dismal figures meant he would have faded away soon. He needed to start working on improving his bowling skills immediately.

However, Ishant wanted himself to be one of the finest bowlers, if not the best, India has ever produced. And the urge to achieve that finally took him on the path of redemption. He started improving as a bowler since 2014 and never looked back since then. 38 wickets at an average of 31.36 in 2014 followed by a tally of 14 wickets at a good average of 31.50 in 2015, once again, summed up his significant improvement from his dismal performances in back-to-back years of 2012 and 2013, during which he averaged 75.57 and 48.16 respectively. He took 25 wickets at an almost similar average of 33.76 during the next couple of years as well but these figures still seemed quite mediocre as compared to the standards of contemporary pacers in the format.

Moreover, his place in the side came under jeopardy as the period saw the rise of young and talented fast bowlers from every nook and corner of the country. It was high time that he stepped up, or, else, he knew what was going to happen. Just when everything seemed to be getting away from him, Ishant started pulling things back towards himself with all the strength and determination he had.

A county stint with Sussex, under the tutelage of former Australian pacer, Jason Gillespie, in 2018 turned his career around for the better. Ishant learnt a lot of things during his three-month stint in England and the results were there to be seen. He claimed a total of 41 wickets in just 11 matches in 2018 and, that too, at an outstanding average of 21.60 and an equally good strike-rate of 49.0. Never in his entire India Test match career Ishant had averaged in the 20s, and had a strike-rate below 50 but it was happening now.

“Sometimes he would stand there and stare if a decision hasn’t gone his way or he wasn’t happy with the delivery or whatever. He would slowly trudge back. It wasn’t ideal. So I would keep telling him to show some urgency. When he started to do it – that was the turning point for me, not any particular spell in a match,” Gillespie was quoted as saying in Indian Express.

“I would keep telling him to show urgency. In county cricket, you had to bowl 96 overs in a day. So first of all, I had to sort it out in that respect. Secondly, it meant he wasn’t wasting his time thinking about irrelevant stuff,” he added.

Gillespie also worked with Ishant on a lot of technical aspects starting from his wrist position at the time of delivery to how he could use the crease better to create awkward angles for batsmen.

“We worked on his seam and wrist position at release. The aim was not to get this ball swing in. Have an upright seam and we talked about adjustments needed and how to keep the wrists and fingers in a particular way. We also talked about how he could use the crease better – create different angles to keep the batsmen guessing.

“I would say he is now playing to his strengths. Sometimes you end up trying too much. He has cut out all that. He now runs in to bowl, thinking about his strengths. That’s the difference really,” he added.

The talent and potential that was first spotted in 2007 had now fulfilled its purpose 12 years down the line. Ishant is now the central figure who lends balance with his tight line and lengths to an attacking three-pronged, and, sometimes, even four-pronged, Indian pace attack.

He has had a long break from international cricket as the last Test match that India played was in December 2018. And he showed that he is all charged up for the next challenge in the Caribbean as he registered a fine spell of 8-1-21-3 in the practice match against West Indies A, before the all-important two Test cricket games against West Indies kicks off on August 22.

Ishant already has a fine record in Caribbean conditions having claimed 35 wickets in just 10 matches at an average of 27.57. And his aim would be to make his numbers look even better by the end of the series. (read more Indian cricket team news)