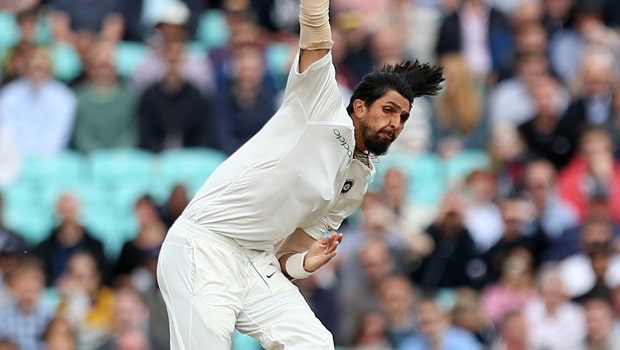 It was Jasprit Bumrah who stole the limelight with his breathtaking bowling performances during the recently concluded Test series India vs West Indies. A fabulous spell of 8-3-7-5 in the fourth innings of the first Test at Antigua was followed by yet another exhilarating spell of 12.1-3-27-6, which included a breathtaking hat-trick as well, in the second innings of the second Test at Jamaica.

Not only that, he finished the series as the highest wicket-taker with 13 wickets to his name at an excellent average of 9.23 as well. Clearly, it is hard to look at anything else when there are such mind blowing numbers to stare at. However, there was another Indian bowler whose efforts during the series deserve equal recognition as that of Bumrah. And he is none other than Ishant Sharma.

The 31-year-old registered equally good numbers during the series as Bumrah by claiming 11 scalps at an excellent average of 12.27. Yes, it can be argued that a difference of two wickets and +3.04 in bowling average is quite a healthy margin to place two bowlers on different pedestals in a two-match Test series. However, study of their statistics in Tests since 2018 reveal that Ishant has been as good a bowler as Bumrah.

The difference between their numbers during this period has been very marginal. While Bumrah has registered an average of 19.24 and a strike-rate of 43.7 during this time-frame, Ishant has almost mirrored those numbers as he has averaged 19.78 striking at an interval of every 44.3 deliveries. Moreover, the difference between their overall economy rates has been very little as well. While Bumrah has conceded runs at a rate of 2.64 per over, Ishant hasn’t been far behind with an economy rate of 2.67.

Yes, it can be argued that Bumrah (62) has 10 more wickets than Ishant (52) despite playing a match less than him during this period. However, a closer study would reveal that Ishant has bowled 71.1 overs lesser than Bumrah. So, that’s 427 deliveries lesser to be precise and Ishant’s strike-rate of 44.3 deliveries per wicket suggests that he would have almost equaled Bumrah’s tally of 62 wickets if he would have bowled those overs.

Moreover, Bumrah has registered five 5-wicket hauls during this period as compared to Ishant’s two. While that suggests more match-winning performances from Bumrah, Ishant has provided assurance and consistency in terms of wickets almost in every match for the Indian team. In fact, he has gone wicketless only once in the 25 innings he has bowled since last year. So, that sums up his importance in the Indian bowling lineup now. In fact, it took a long time for Ishant to reach his true potential. But now that he has finally arrived, he should keep making each and every performance count. Checkout cricket news today.