It is definitely tough and challenging: Gary Stead on India’s tour right after T20 World Cup 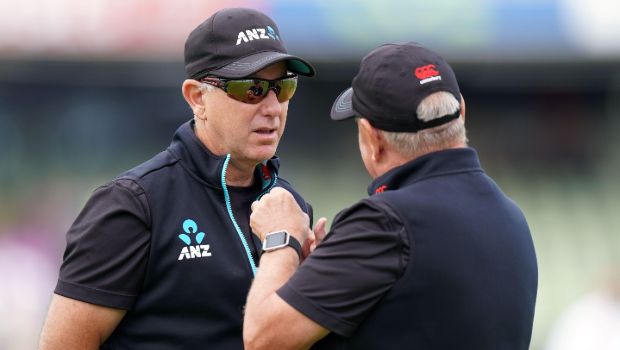 New Zealand has no time to move on from their heartbreaking T20 World Cup final loss as they will play the first T20I against India on Wednesday.

The Kiwis were defeated by Australia in the final on Sunday by eight wickets at the Dubai International Cricket Stadium.

New Zealand head coach Gary Stead reckons it is difficult for the players to straight away tour India for a three-match T20I and two-match Test series after such a short break. The Kiwis haven’t had any time and it won’t be easy for them to give their 100% after suffering a heartbreaking loss in the T20 World Cup final.

Gary Stead said while talking to ESPN Cricinfo, “It’s the first time that I can remember that we’re so quickly into another series immediately at the back-end of the T20 World Cup. It’s definitely tough and challenging but it is what is in front of us.

“We’ve got nine-ten guys in India already, who are preparing for those Test matches, and hopefully we can get up and have a really great performance against India.”

Meanwhile, New Zealand is also sweating over the injury of their gun fast bowler Lockie Ferguson. The right-arm fast bowler suffered a calf injury before the New Zealand opening World Cup match against Pakistan, which ruled him out of the marquee event. Stead revealed that Ferguson is close to being 100% fit now.

“In terms of Lockie, I think he is pretty close. We will just make sure we get over there, travel okay and there are no issues like seizing up on the flight or anything like that. But I’d expect that he’s going to be available for selection, which will be fantastic,” Gary Stead concluded.

In fact, Ferguson had resumed training in the UAE and also bowled in the nets. Meanwhile, New Zealand came up with fine performances in the T20 World Cup but they could not cross the last hurdle against Australia. However, the Blackcaps will look to continue their good form against the Indian team.

The first T20I between India and New Zealand will be played in Jaipur on November 20.