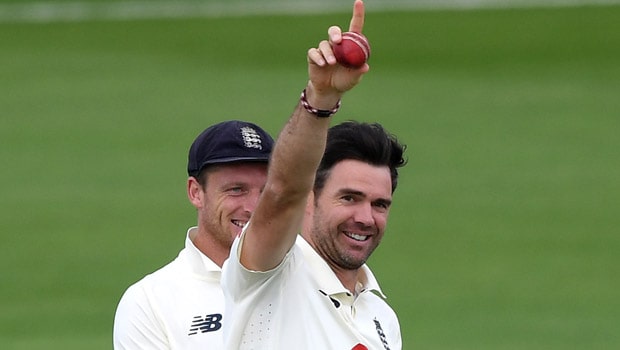 England’s pack leader James Anderson wrote his name in the history books as he became the first fast bowler to take 600 Test wickets. After a delay of more than five hours, play was finally possible on the final day of the third Test match at Ageas Bowl, Southampton. James Anderson didn’t have to wait long as he got one to bounce from the length to take the outside edge of Pakistan’s skipper Azhar Ali’s bat.

England captain Joe Root took a good catch at first slip and the England players were all smiles for Anderson. The England spearhead bowled 33717 balls to take 600 Test wickets and took only six balls more than Muttiah Muralitharan, who took 33711 balls.

On the other hand, Shane Warne bowled 34919 balls to scalp 600 Test wickets whereas Anil Kumble 38496 balls to get to the landmark. Anderson is the first fast bowler to join the 600 wickets club as Muttiah Muralitharan, Shane Warne and Anil Kumble were the spinners to have achieved the feat.

Anderson was at his best in the first innings as he had scalped his 29th five-wicket haul. The England’s veteran has great skills of moving the ball both ways and has bowled with great success for England. In fact, Anderson was unlucky as four catches were dropped off his bowling.

Anderson is regarded as one of the best swing bowlers to have ever played the game and he has done a fine job for England. The fast bowler made his Test debut back in 2003 against Zimbabwe in 2003 at the Mecca of Cricket, Lord’s. Since then, he has been an integral part of the England team and has got better with experience.

In fact, there were some doubts raised on the place of James Anderson after the first Test match against Pakistan when he could only take one wicket. However, he was able to prove his mettle once again.

Anderson has got better with time as he was averaging 34.80 when he took his 100th Test wicket. The fast bowler has bowled with an average of 26.76 and he is still going strong at 38.