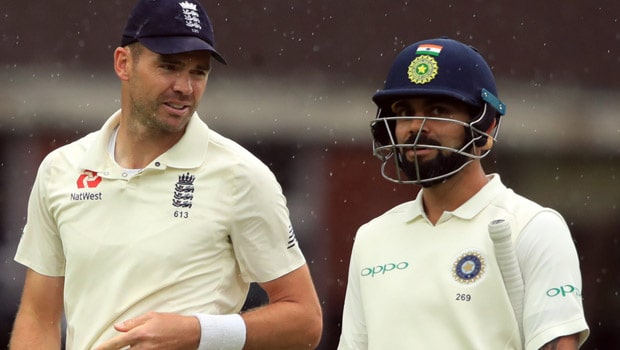 The Indian captain Virat Kohli has revealed that England’s pack leader James Anderson is one of the best he has ever faced. Anderson had troubled Kohli on the 2014 tour as the fast bowler had breathed down the neck of the Indian talisman. Kohli congratulated Anderson when the fast bowler reached 600 Test wickets and became the first pacer to reach the milestone.

In fact, Anderson was not able to dismiss Kohli in the 2018 series. Furthermore, Anderson has had his wood on Kohli in the 50-overs format as he got rid of the right-hander on three occasions.

Congratulations @jimmy9 for this outstanding achievement of 600 wickets. Definitely one of the best bowlers I've faced.

Meanwhile, Virat Kohli is one of the best batsmen in the game and Anderson was able to get the better of him. It has always been a fascinating battle between the two and the aficionados have enjoyed the same.

On the other hand, James Anderson has had a great career for England. The swing master made his debut back in 2003 against Zimbabwe and since then he has been an integral part of the team. Anderson has got better with experience as he is currently averaging 26.7 in his career. The fast bowler has also revealed that he wants to be part of the team till the next Ashes.

Anderson has done a fine job over the years and he still wants to keep going at 38. The fast bowler is fit as a fiddle and there is no doubt that he can continue for the next two years. Anderson has always been instrumental in the success of the team and he would look to do a fine job for the team.

Virat Kohli took to his Twitter account to congratulate James Anderson on reaching the milestone. Kohli’s post read as, “Congratulations @jimmy9 for this outstanding achievement of 600 wickets. Definitely one of the best bowlers I’ve faced”.