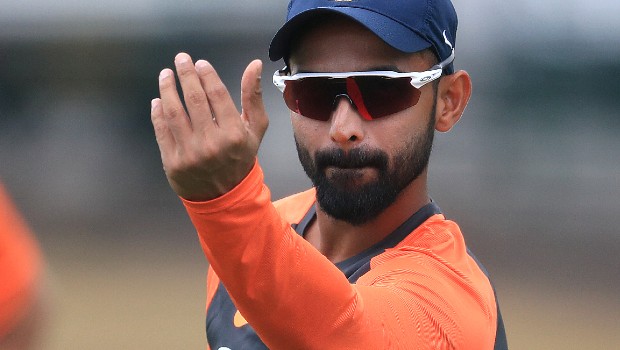 Indian Test vice-captain Ajinkya Rahane rated England veteran swing master James Anderson as the most challenging bowler he has faced in his career. Rahane believes facing Anderson in the English conditions is most arduous for him. In fact, Rahane has a good record while playing in England and he had also scored a century in India’s famous win in the Lords’ Test match in 2014.

On the other hand, James Anderson is the most lethal when the ball is new and if there are overcast conditions. Anderson has the skills to move the ball both ways and he is mostly right on the money with his line and length. Thus, the England seamer has breathed down the neck of the best players in the world.

Anderson is the fourth-highest wicket-taker behind Muttiah Muralitharan, Shane Warne and Anil Kumble in the Test fold with 584 scalps under his belt in 151 Test matches he has played. The right-arm pacer has bowled with an impressive average of 26.83. The 37-year old fast bowler is the highest wicket-taker in the red-ball version as a pacer.

“Talking about one particular bowler – James Anderson in England is really challenging. He knows the conditions well. He (Anderson) is the one,” said Rahane on an Instachat live chat organised by his employer ‘Indian Oil’ on Tuesday.

Meanwhile, Anderson has troubled Rahane with his swing. The veteran England seamer has dismissed the Indian Test deputy on four occasions in the Test fold whereas Anderson has got out the right-hander on two occasions in the 50-overs version. Furthermore, Rahane has scored 619 runs in 25 innings he has played against England at an average of 25.8.

On the other hand, Ajinkya Rahane is one of the rare batsmen whose overseas records are more impressive than playing in Indian conditions. However, Rahane hasn’t been in the best of forms in the recent past. Thus, the flamboyant batsman will like to get back into form and deliver the goods for the team, whenever he nexts plays for India.

Rahane has scored 4203 runs in 65 Test matches at an average of 42.89. The right-hander is currently out of the limited overs side and he has scored 2962 runs in 90 ODI matches. However, Rahane was ousted from the ODI team mainly due to his inability to score at a brisk pace as his strike rate is 78.63.