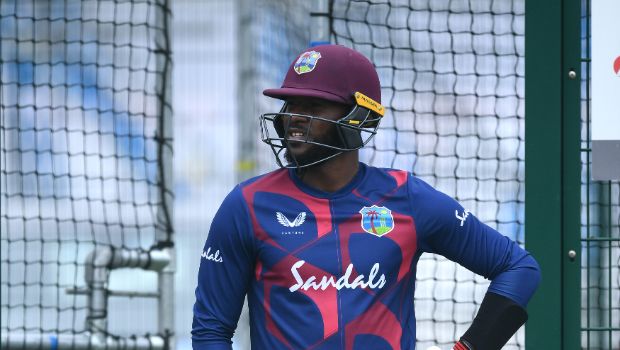 West Indies’ batsman Jermaine Blackwood has impressed with his skills in the recent past. Blackwood had scored a gutsy 95 against England in Southampton, which had helped his team chase down the target of 200 runs.

Subsequently, the right-hander scored a magnificent hundred in the tough conditions against New Zealand at Hamilton.

However, initially, in his career, Blackwood used to get off to starts but couldn’t convert them into substantial scores. Blackwood has thus far played 33 Test matches in which he has scored 13 fifties and two centuries. Consequently, Blackwood’s conversion rate of making a 100 after scoring a 50 is poor.

The Windies batsman sought Indian captain Virat Kohli’s help on the social media platforms and also when India had toured West Indies back in 2019. Kohli advised Blackwood to just face a good number of balls and then the runs will eventually come. Blackwood has an impressive strike rate of 59.93 in the Test fold and thus he can get a big score if he takes his time and faces more than 150 balls.

Blackwood said as quoted by Cricbuzz, “I don’t really have a lot of conversations with international players. I talked to Virat Kohli a few times as well, on social media. The last time India toured the Caribbean, I had a chance to talk to him in Jamaica when I was there subbing. So, after the game, I just had a small conversation. I asked him about how all the time that I have a lot of half-centuries and one century. He just said, what will you do when you score a century, how many deliveries did you face? I said I faced 212 balls. He said that’s it, once you can bat some balls, you’re going to score runs.”

Blackwood added he wants to make big hundreds for West Indies and the right-hander also admitted that his shot selection led to his downfall in the initial phase of his career.

On the other hand, Blackwood also revealed that West Indies’ talisman all-rounder Andre Russell also gave him pointers, which has helped him improve his game. Blackwood added he is batting really well in the nets and he is confident for the upcoming series against Bangladesh and he would aim to give his best.

West Indies were clean swept by Bangladesh in the three-match ODI series. The tourists will face the hosts in the first Test match at Zahur Ahmed Chowdhury Stadium, Chattogram from the 3rd of February and they will look to bounce back.