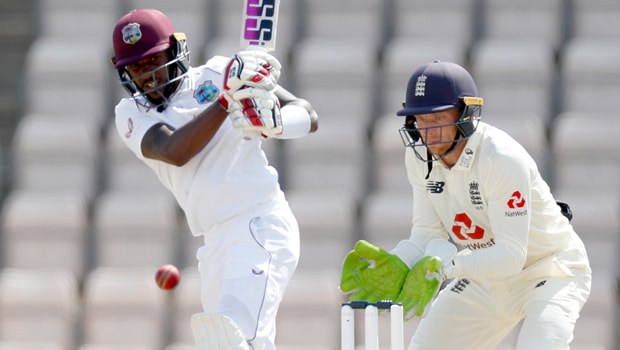 All the three results were possible on the final day however a West Indies win was the most likely one. It turned out to be the final result as the tourists won the memorable match by four wickets, courtesy Jermaine Blackwood’s 95 as West Indies took a 1-0 lead in the three match Test series. The right-hander got the team out of the woods as they were reeling at 27-3 after a fiery opening spell of fast bowling from Jofra Archer.

The hosts were 170 ahead and had only two wickets in hand before the start of play. Jofra Archer got some crucial runs down the order as he swung his bat hard. However, England were skittled out for 313 after Shannon Gabriel took his sixth five-wicket haul (5/75), dismissing both Wood and Archer.

Thus, West Indies had to chase a tricky target of 200 to draw first blood in the series. However, it was not going to be cakewalk as Jofra Archer, who had gone wicketless in the first innings, was right on the money in his spell.

John Campbell was retired hurt after Archer bowled an accurate yorker on his front toe. Subsequently, the Windies lost their first wicket when Kraigg Brathwaite chopped the ball back onto the stumps and England had an opening. Brooks was plumbed in front by Archer and then Wood found the gulf between Shai Hope’s bat and pad to give a blow to Windies’s hope.

However, Roston Chase and Jermaine Blackwood were able to rescue the sinking ship. Both the right-handers showed the gumption and played out the good spell of bowling.

In fact, England had their chances but they could not grab them. Blackwood was given two reprieves, first when Jos Buttler bungled the ball while trying to take the catch with one hand, when the right-hander had gloved the ball. Second chance gone done begging when Rory Burns could not pick the ball in the slips. Furthermore, Zak Crawley fumbled when there was a run-out chance to get Roston Chase.

However, West Indies didn’t let go of their chances and whenever the ball was in the arc, Blackwood took advantage. The right-hander had played a reckless shot in the first innings but he was showing all the resistance in the second innings.

In the post-lunch session, West Indies held sway as they added 108 runs and lost only one wicket of Roston Chase, who was dismissed off a snorter from Archer. But by then, Chase and Blackwood had added 73 runs and got their team to 100, which was halfway of the target.

Shane Dowrich continued from where he left in the first innings but Blackwood dominated the partnership as he scored 48 out of the 68 runs scored. Dowrich was finally dismissed by Ben Stokes one ball after the England captain had overstepped when the right-hander had edged to first slip.

Blackwood could not get to his second Test hundred after he once again found James Anderson at mid-off but not before playing a match-winning knock of 95 runs. John Campbell came back and hit the winning runs along with West Indies captain Jason Holder.

The second Test match will take place at Old Trafford, Manchester from July 16.