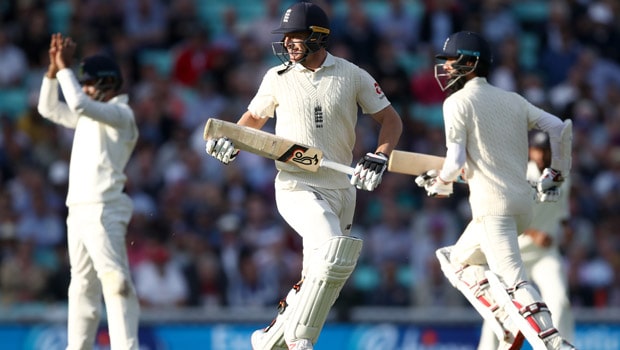 England’s wicket-keeper batsman Jos Buttler has been under the pump in the recent past regarding his place in the Test side. Buttler hasn’t scored runs consistently in the recent past and his fifty against the West Indies in the third Test at Old, Manchester came after a wait of 12 Test matches.

The wicket-keeper had a torrid time behind the stumps in the first Test match against Pakistan at the same venue of Old Trafford, Manchester.

Buttler missed three chances in Pakistan’s first innings as he struggled to keep with confidence. The wicket-keeper gave two reprieves to Pakistan opener Shane Masood when he was only on 45. First, Buttler shelled a catch and then fumbled once more as he could not stump Masood of bowling off Dom Bess.

Subsequently, Masood went on to score 156 runs to take Pakistan’s tally to 326. Thus, there was a difference of 111 runs more after Masood was given two lifelines by Buttler.

At 117-5, England looked down and out when they were chasing 277 in the fourth innings. However, Buttler switched on his One-Day mode and scored a brilliant knock of 75 runs to take his team closer to the target. Butter added a match-changing alliance of 139 runs with Chris Woakes, who went on to score a magnificent unbeaten knock of 84 runs to take his team to a thrilling win by three wickets.

Buttler was under all kinds of pressure when he had come to bat as he knew that he hadn’t kept well and if he didn’t score runs, he could well be playing his final match.

“Definitely thoughts go through your head, like potentially if I don’t score any runs I’ve probably played my last game. Those kinds of things are in your head, but you’ve got to try and shut them out and try and focus on the here and now and play the situation and I’m pleased that I was able to do that,” Buttler said.

There is no doubt the questioning on Buttler’s place in the Test side would be now put to rest. The right-hander was at his best in the second essay and took the attack to the Pakistan bowlers, who didn’t have an answer to his onslaught. Overall, Buttler scored 113 runs in the Test match as he had played a crucial knock of 38 runs in the first dig.

The second Test match between England and Pakistan will take place at Ageas Bowl, Southampton from August 13.