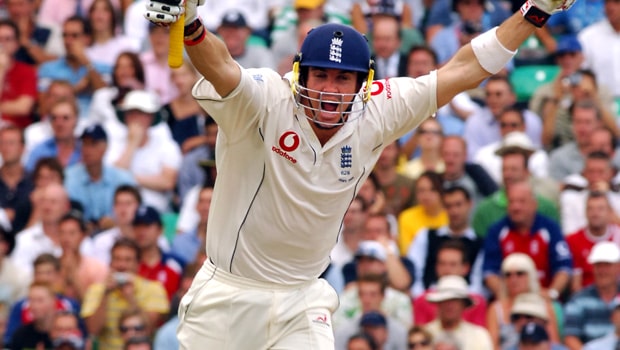 England’s former batsman Kevin Pietersen is regarded as one of the most explosive batsmen in the limited overs format. Pietersen was in a dilemma to face spin back in the days and he approached his Royal Challengers Bangalore teammate, Rahul Dravid for help. Pietersen and Dravid played together for RCB during 2009 and 2010 season and thus shared a great bonhomie with each other.

Pietersen was not confident of facing spinners like Shakib Al Hasan and Abdul Razzak on the tour of Bangladesh in 2009-10. Subsequently, he asked Dravid how he should face these spinners in favourable spin conditions of the sub-continent.

Dravid advised Pietersen that he should practice against Graeme Swann and Monty Panesar without wearing any pads or only knee pads in the net sessions. Consequently, without any protection, Pietersen would be forced to get his bat in front of his front foot and it would solve his woes.

The advice worked wonders for Pietersen as he practiced the same way Dravid had told him and the results were palpable. Pietersen went on to score 250 runs in two Test matches at an impressive average of 83.33 against Bangladesh in 2009-10.

“Dravid wrote me the most beautiful email, explaining the art of playing spin and ever since then it was a whole new world. The key point was looking for the length as soon as the ball was delivered – wait for the spinner and make your decision,” Pietersen said on Sky Sports.

Pietersen had earlier mentioned Dravid in 2017, in an excerpt from his book ‘KP: The Autobiography’. “One good practice is to bat against Swann and Monty without pads or with just knee pads (maybe not a day before a game!). When you have no pads it will force you, sometimes painfully, to get the bat forward of the pads and will force you to watch the ball,” read a part of Dravid’s mail to Pietersen.

Rahul Dravid has always been known to help the other players and he also did the same for Kevin Pietersen. Dravid had all the experience in the world and he was always ready to assist the players on the right track. The England batsman was known for his blistering batting and delivered the goods for the team.