KKR played a vital role in me adorning the Blues: Venkatesh Iyer 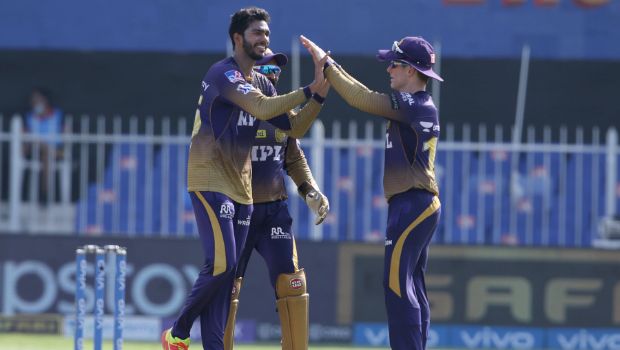 India greenhorn batter Venkatesh Iyer has admitted that Kolkata Knight Riders played a vital role in him adorning the Blues.

Furthermore, he scalped three wickets in the four innings he bowled for Eoin Morgan-led team. After impressing in his first season of the IPL, Venkatesh Iyer received his maiden call-up in the Indian squad and made his debut against New Zealand in the three-match T20I series.

Iyer was given a finisher role by the team management and he did a decent job for the side. The Madhya Pradesh player has shown the skills to deliver with both bat as well as the ball and thus he can end India’s search for a seam-bowling all-rounder as Hardik Pandya hasn’t been at the top of his fitness.

On the other hand, Venkatesh Iyer was retained by KKR along with Andre Russell, Sunil Narine, and Varun Chakravarthy. Iyer was bought for INR 20 lakhs in IPL 2021 auction but he has been retained for a whopping amount of INR 8 Crores, which is 400% of his 2021 auction price.

“I am really happy to be back, KKR is the franchise that gave me my big break and introduced me to the world of cricket. I am extremely grateful to KKR management for putting their faith in me. I feel at home being a part of KKR, the franchise has played a very vital role in me adorning the blues. I am looking forward to playing at Eden gardens, it’s always special to be there and to play in front of a packed crowd,” said Venkatesh Iyer as per an official KKR release.

Meanwhile, Varun Chakravarthy was also retained by the franchise for a hefty amount of INR 8 crores. Chakravarthy gave his gratitude to the team for backing him before the mega auction.

“It feels great to be a part of KKR again, the administration has been very supportive and they are a great bunch of people. I am really excited this time as we will be playing at Eden Gardens with all our fans supporting us and I hope that we will make them proud,” said Varun Chakravarthy.

Speaking on player retention, Venky Mysore MD and CEO, KKR said, “We are really pleased retaining Sunil, Andre, Varun and Venkatesh, they are truly special and will form a good nucleus for us to build on for the next three seasons ahead.”

“I want to thank the entire squad that was a part of the KKR journey during 2021, it was an amazing collective effort to create a comeback that is one of its kind in the history of IPL. We hope that it will be the foundation for better performances going ahead,” he added.