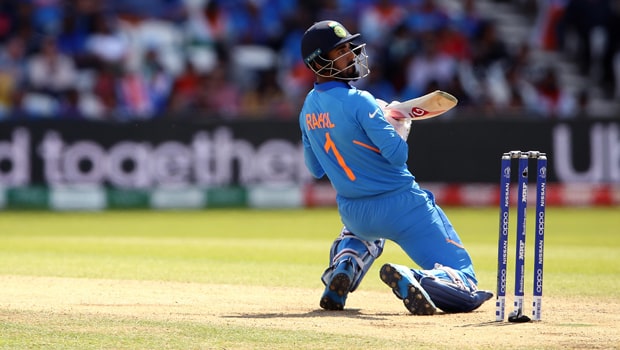 With Rishabh Pant out of the squad after testing positive for COVID-19, KL Rahul found himself back in the starting XI. Rahul made the most of this rare opportunity and showed his class once again in with a sublime hundred on the opening day of the warm-up game against County Championship XI.

The severely depleted Indian side – missing its skipper Virat Kohli (back niggle) and vice-captain Ajinkya Rahane (hamstring injury) – suffered hiccups early on. However, they bounced back strongly to end the day at 306 for 9.

India’s top-order failed to inspire confidence with stand-in captain Rohit Sharma falling to a short ball after a careful start. He was soon joined by his opening partner Mayank Agarwal who was also dismissed by Lyndon Johnson.

Cheteshwar Pujara, who is known for his decisive footwork, failed to judge Jack Carson’s slightly flighted delivery just outside off-stump, and came down the track only to be stumped by 17-year-old wicket-keeper James Rew.

With India reeling under pressure at 67 for 3, KL Rahul arrived at the crease and swung the balance of the game. He first stitched a 40-run partnership with Hanuma Vihari. However, Vihari’s impatience after lunch cost him dearly as he failed to clear the ropes off a Liam Patterson-White delivery and was promptly dismissed.

Not to be deterred by it, Rahul continued to take on the bowlers and dispatched them to all parts of the ground. He looked to be in his element and was joined by Ravindra Jadeja. Together, the pair added 127 runs for the fifth wicket to pull India back into the contest.

It took Rahul only 75 deliveries to get to his half-century and another 75 balls to register the ton. Rahul entered the 90s by stepping out of his crease and lofting off-spinner Carson towards the long-off boundary. Another backfoot punch off Patterson-White got him his century. All in all, his innings included 11 boundaries and a six.

In the following over after getting to his century, KL Rahul retired out, and Shardul Thakur took on the onus. He gave a good account of himself by scoring a 28-ball 20 while Umesh Yadav scored a 14-ball 12, which included a six and a four. Ravindra Jadeja fell 25 runs short of a century and was dismissed in the final hour of the day.

Avesh Khan ended up suffering a thumb injury while fielding. Washington Sundar was also included in the County Select XI but did not get to bowl a single over in the match.