Home » Cricket » Krishnappa Gowtham does it for Karnataka yet again

Krishnappa Gowtham does it for Karnataka yet again 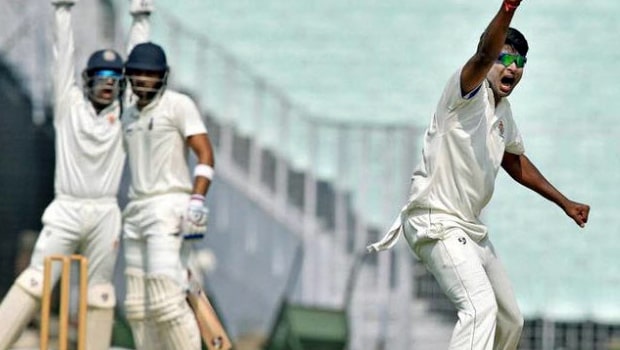 It wasn’t long ago when Krishnappa Gowtham was bowling an all-important last over for Karnataka in the finale of Syed Mushtaq Ali Trophy against arch-rivals Tamil Nadu. He had just 12 runs to defend off the last over and, even though he was struck away for back-to-back boundaries off the first two deliveries of the over, he held his nerves somehow to give away just three runs in the next four deliveries.

As a result, Karnataka went on to win the final by a slender margin of just a solitary run. Even though there were other star performers in the match like Manish Pandey, it was Gowtham who found himself playing the most crucial role while bowling the last over and thus, ended up with a significant spell of 4-0-31-1.

12 days down the line, the 31-year-old found himself in the same position once again and against the same team, but this time in their opening match of the premier first-class competition of the country- the Ranji Trophy. During the Syed Mushtaq Ali T20 final, Gowtham didn’t have big numbers to show to his name but he went on to own the final moments of the match with his tight bowling.

However, this time, Gowtham didn’t only own the final moments but was also the star of the match with his all-round performance. He scored a quickfire 51 off just 39 deliveries in Karnataka’s first innings of the match and followed it up with a terrific bowling spell of 40.3-8-110-6 as well.

And when Karnataka were bowled out for a paltry total of 151 runs in their second innings, thus setting Tamil Nadu a target of only 181 runs to chase down, it was Gowtham once again who did the unthinkable. He went on to better his first innings bowling performance as he registered a stunning eight-wicket haul, a spell of 30.3-11-60-8, to power Karnataka to a thrilling 26-run victory.

In fact, Tamil Nadu fought hard. At one point, it looked like Murugan Ashwin (23*) and Manimaran Siddharth (20) had a chance of taking Tamil Nadu over the line. They had stitched together a partnership of 36 runs for the ninth wicket having occupied more than 80 deliveries at the crease. But it was Gowtham once again who cleaned up Siddharth in the 62nd over of their innings, and trapped Krishnamoorthy Vignesh lbw right in front of the stumps in his very next over, to wrap things up for Karnataka.

Gowtham ended up with match figures of 14 for 170 which also became his best bowling figures in his first-class career so far. He has had a very good season so far and has performed well both in domestic cricket and India A series. If he goes on to carry this form forward into the upcoming Indian T20 League as well, we might see him making a late entry into India’s T20 World Cup squad which is scheduled to be played next year in Australia.