Home » Cricket » Mohammed Shami turning the heat on in 2019

Mohammed Shami turning the heat on in 2019 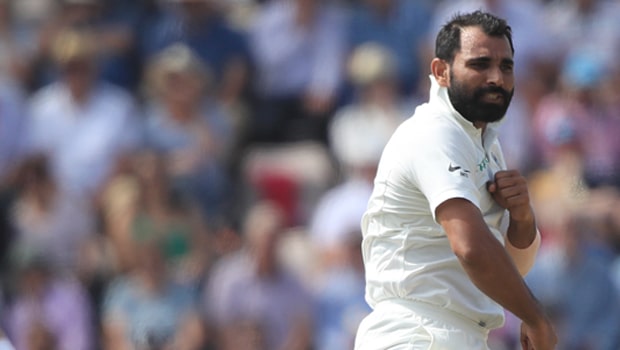 India pacer Mohammed Shami has scaled new heights in the ICC Test rankings for bowlers as he jumped eight places to seventh following his match-winning contributions of 3 for 27 and 4 for 31 in the first Test against Bangladesh at Indore.

Shami’s 790 points is now the third best for an Indian pacer after that of Kapil Dev (877) and Jasprit Bumrah (832). It has been a fabulous year for the 29-year-old pacer from Bengal. He has already taken 31 wickets in seven Test matches at a stunning average of 15.22 and an equally good strike-rate of 34.0. Not only that, these are the best numbers recorded by him in Tests in any year.

Shami strikes twice in an over, as Bangladesh lose seven wickets.

India are on top in Indore.

Moreover, his tally of 31 wickets is also the third best for any bowler this year. Only Pat Cummins (43) and Stuart Broad (34) have more wickets than him. But Shami has played a match lesser than them and both his average and strike-rate are better than that of the other two bowlers.

Shami has also been seen in scintillating form in the ODIs this year. He has claimed 37 wickets in 18 ODIs in 2019 at an average and strike-rate of 21.32 and 24.4 respectively. 14 of those wickets came in the World Cup in England at a mindboggling average and strike-rate of 13.78 and 15.0 respectively. These wickets also included a breathtaking hat-trick against Afghanistan which made him only the second Indian bowler to take a World Cup hat-trick after Chetan Sharma.

So, these numbers go on to show how good he has been with his bowling irrespective of the format. In fact, Shami has been bowling with a renewed vigour ever since he recovered from his injury. He has worked on his action which is helping him to generate more pace and his rhythm has been excellent as well. He looks fitter than before and these numbers are only going to get better by the end of the year.