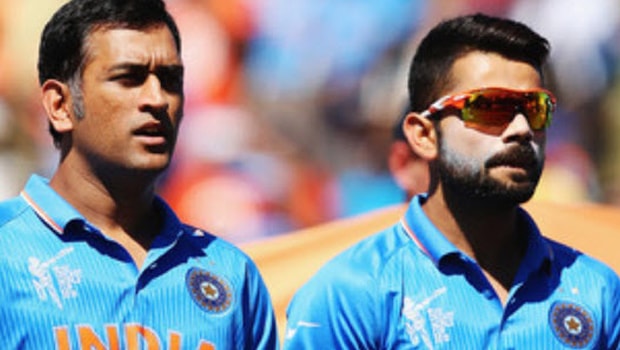 The Indian captain Virat Kohli has given credit to former skipper MS Dhoni for playing a big role in getting him the captaincy. Kohli revealed that he was always eager to get the responsibility of leading the national side. The current skipper added that he would keep sharing his ideas with Dhoni and he will always be in his ears with the suggestions.

Consequently, Kohli was able to create an impression on MS Dhoni that he can lead the Indian team after the latter relinquishes his duties. Dhoni suddenly decided to call it a day from the Test format and the captaincy baton was passed on to Virat Kohli.

Subsequently, Dhoni also decided to give up his captaincy from the ODI and T20I format and Kohli has been leading the team in all the three formats of the game.

Both Dhoni and Kohli are different captains and they have their own style of leading the team. Dhoni was always calm and composed whereas Kohli is aggressive and he is known to take the bull by its horns. However, there is no doubt that Virat Kohli has learned the nitty-gritties of captaincy from his predeccessor.

“I was always inclined towards taking responsibility,” Kohli said during an Instagram chat with team-mate R Ashwin. “After that it was all about just wanting to play, wanting to be in the XI regularly. I didn’t play all the games, but I wanted to discuss, that ‘whether this guy is good enough to play or not.’ That is a transition that slowly happens.

“Then with your interest in the game you start talking to the captain regularly. I was always in MS’s ear, standing next to him, saying, ‘We can do this, we can do that.’ I think he got a lot of confidence that I can do this after him.

“A large portion of me becoming captain was also to do with him observing me for a long period of time.

Meanwhile, MS Dhoni was always known to get the best out of his players and Kohli has learned a lot from his former skipper. Both Dhoni and Kohli have shared a great bonhomie with each other and their bond has solidified over the years. MS had backed Kohli in his formative years as International cricketer whereas Kohli also did the same in the fag end of Dhoni’s career.