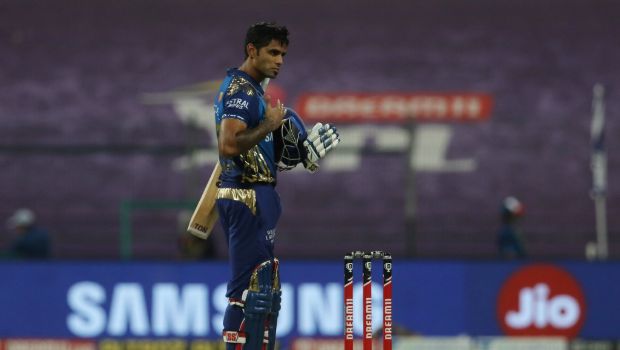 India’s batsman Suryakumar Yadav has risen through the ranks with his consistent performances in the IPL and the domestic tournaments.

Yadav was knocking at the selection doors of the national team for some time now and he was finally rewarded as he has been picked for the T20I series against England.

SKY, as he is known, had scored 480 runs in 15 innings at an average of 40 in IPL 2020 and a whirlwind strike rate of 145.02. In fact, a lot of cricket boffins feel the right-hander should have received his chances in the series against Australia but the selectors didn’t pick him.

Meanwhile, Suryakumar Yadav credited the role of Mumbai Indians in his rapid rise. Yadav had made a move from KKR to MI in 2018 and he has delivered the goods for the Rohit Sharma-led side. Yadav has been given the role in the middle order and he has done justice to the faith, which has shown in him by the team management.

“I think their (Mumbai Indians) support has been immense. I still remember when I came back to MI from KKR in 2018… my role at KKR was completely different, I used to bat lower down the order and play the finisher’s role,” Suryakumar Yadav said while speaking to Sports Today.

“But at MI, the plan was crystal clear, they wanted me to bat higher up the order, they gave me that responsibility, they gave me that challenge to go out and express fearlessly. I started batting at No. 4, I also got an opportunity to open.

The 29-year old gave credit to the Mumbai Indians for their continuous support and also lauded Rohit Sharma’s role in helping him play fearlessly.

“I really enjoyed that role as well and later on, they just kept supporting me. The way they have pushed me and shown confidence in my ability has been great and very positive from their side. I have really enjoyed it in the last 3 years,” Suryakumar added.

“Talking about all the players, starting from the captain, he (Rohit) has shown a lot of faith in me. A lot of positive energy from his side and then there has been Hardik, Krunal, and Kieron Pollard, they have been playing around me.

Suryakumar Yadav will look to make the most of his opportunity and deliver for the Indian team if he gets his chance in the five T20Is against England. The right-hander has also been consistent for his state team, Mumbai and he will join the national squad on March 1.

The T20I series will begin on March 12 in Ahmedabad.