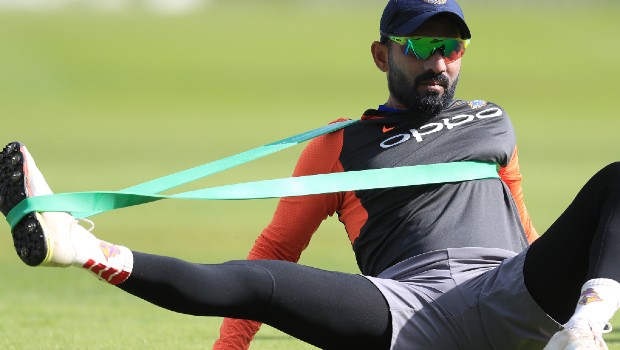 Indian batsman Dinesh Karthik was left a tad surprised when the think tank asked him to bat at number five in the all-important World Cup clash against New Zealand. Karthik revealed that he was earlier asked to bat at number seven throughout the tournament whenever he was part of the final XI and he was not prepared for the surprise.

However, India was in a pickle when they were tottering at 5-3. Thus, Virat Kohli and Co. decided to alter their batting line-up and sent Karthik to bat at number five. It was done so as the team management wanted MS Dhoni to bat lower down the order.

Karthik recalled that he had to hurry himself as he was informed about his batting promotion at the 11th hour. When KL Rahul was dismissed by Matt Henry, Karthik had to go in and even had to scamper.

India was chasing 240 but the early wickets had pushed the team on the backfoot. Furthermore, India had its perennial issues that the middle order didn’t have a lot of batting to do as the top order batters had done the lion share of the scoring. Suddenly, when the top-order crumbled like a pack of cards, the pressure was shifted to middle order in a big semi-final match.

In fact, Karthik was successful in getting himself settled at the crease as he faced 25 balls. However, his resistance was ended by a superb catch from James Neesham.

“It came as a bit of a surprise to me (walking in to bat at five) because they had made it very clear that I would be batting at number seven,” he said in a chat with Harsha Bhogle on Cricbuzz In Conversation.

“But they didn’t expect something like that to happen because we were going pretty strong in the tournament. Rohit was batting so well, you always have Virat, Shikhar had done well till he left. The middle order typically didn’t get enough opportunities to bat, and that is one of the harder ones you know. When the middle order doesn’t get to bat and suddenly are pushed into a big game like this and thrust into such a situation.

There was a lot of pressure and it was not an easy situation for Karthik to walk in. In fact, Karthik had only played in two matches in the tournament before the semi-final clash. He ended up scoring only 14 runs in the three games he played in the ODI showpiece.

As expected, Karthik’s last match in the Indian colours was the heart-breaking semi-final, which India lost by 18 runs. However, there is no denying the fact that the Tamil Nadu veteran batsman has done well in the T20I version. Karthik had recently said that he has not lost hope of once again making it back in the T20I side.