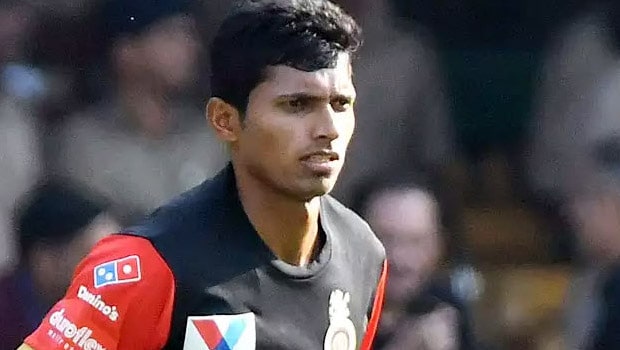 Former Indian opener and now commentator Aakash Chopra feels Royal Challengers Bangalore fast bowler Navdeep Saini will have the opportunity to become the pack leader of the team. Saini has impressed one and all with his express pace and he can also bowl accurately in the death overs.

The fast bowler from Delhi had done well at the domestic level, which helped him in making a place for himself in the national team. The right-arm fast bowler is still taking baby steps at the top level and he has taken 11 wickets in 13 IPL matches.

Meanwhile, death bowling has been RCB’s Achilles Heel in the previous season. Thus, Saini would aim to come up with impressive performance, which can help the team in putting paid to their death bowling woes.

Saini will have the company of experienced bowlers like Dale Steyn, Umesh Yadav and Chris Morris and he will aim to learn as much as he can from them.

Saini has had the experience of bowling alongside India’s Jasprit Bumrah and Bhuvneshwar Kumar and he would aim to come up with his best. Saini has scalped five wickets in as many ODIs whereas he has snared 13 wickets in nine ODI matches.

Aakash Chopra said while talking on his YouTube Channel, “I am looking at a fast bowler – Navdeep Saini. We have seen till now that he has been very good when he has played with Bumrah and Bhuvi. But even at this young age, it is probably the time now to become the leader of the fast bowling pack for RCB.”

On the other hand, Chopra is looking forward to seeing Karnataka’s Devdutt Padikkal, who he feels should open the innings with Australia’s limited overs captain, Aaron Finch.

Karnataka’s Devdutt Padikkal was the highest run-getter in the 2019-20 Syed Mushtaq Ali Trophy as he racked up 580 runs in 12 matches at an impressive average of 64.44. The left-hander was roped for INR 20 lakhs by RCB and he would like to impress if he gets an opportunity in the final XI.

RCB will play their opening match against Sunrisers Hyderabad on 23rd September at Dubai International Stadium.