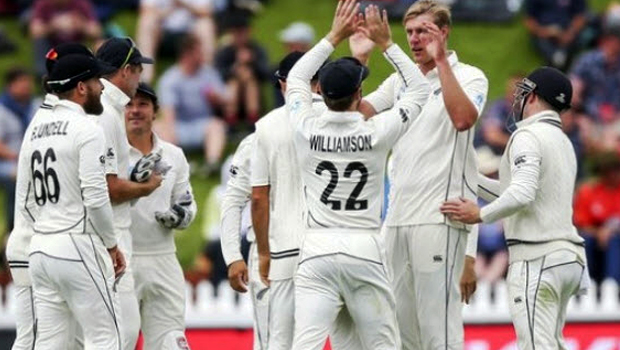 Everyone is well aware about what happened when Kyle Jamieson made his ODI debut for New Zealand in the second ODI of the three-match series against India a couple of weeks ago.

He played an unbeaten knock of 25 to stitch together an unbroken ninth-wicket stand of 76 runs with Ross Taylor and then came back to bowl an excellent spell of 10-1-42-2 to help the Kiwis in bowling India out 23 runs short of the target. Jamieson was rightly adjudged the Man-of-the-match as well for his fine all-round performance. And now, as he made his Test debut for New Zealand in the first Test of the two-match series at Wellington against the Asian giants once again, Jamieson broke the back of the Indian batting lineup once again.

The lanky pacer bowled difficult lengths and swung the ball from time to time to keep the Indian batsmen guessing. He used the overcast conditions to good effect as he induced outside edge off the willows of three of India’s best batsmen in Cheteshwar Pujara, Virat Kohli and Hanuma Vihari to send them back to the pavilion.

Play called at the @BasinReserve for the day. India go to day 2 122/5 with Rahane 38* and Pant 10*. Kyle Jamieson with 3-38 so far. Southee and Boult the other wicket takers. Scorecard | https://t.co/vWdNIMMIwd #NZvIND pic.twitter.com/2wNQ1YkuHi

As a result of Jamieson’s efforts, New Zealand ended up on top at stumps on Day 1. His spell of 14-2-38-3 had reduced India to 122/5 by the end of the first day’s play and it showed once again how good an asset the Kiwis have found in this young bowler.

Jamieson’s job is not done yet as there are still four full days of play remaining. He could well go on to take a fifer on debut.

Moreover, we should not forget about his batting ability as well. He showed how useful he could be with the bat on his ODI debut and he has three fifties to his name in first-class cricket as well.

As far as his bowling numbers in first-class cricket go, his tally of 72 wickets in 25 matches at an average of 27.93 go on to show how good a bowler the 25-year-old is in this format.

So, Jamieson may well go on to overshadow the more popular players with his performances in this match. He has already done that on the first day. It’s just a matter of time before he dominates the remaining four days as well.