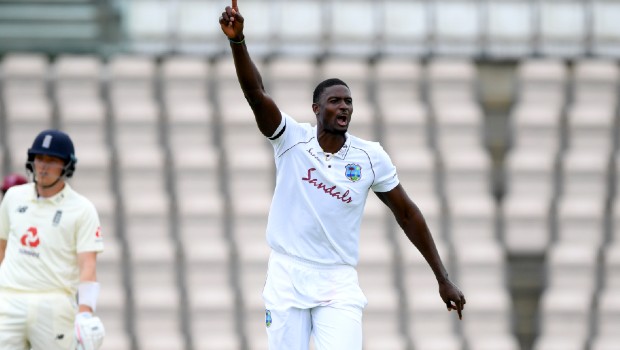 The West Indies captain Jason Holder dominated England on the second day of the first Test match at Ageas Bowl. Holder claimed his seventh five-wicket haul as he breathed down the neck of the England batters. It was Holder’s maiden five-wicket haul against England and now he has set another goal.

The world’s number one Test all-rounder, Holder wants to score a century in England, which he has never done. Holder already has scored three Test centuries and he wants to have a century in the English conditions.

Meanwhile, Jason Holder was at his best on the second day of the Test match. Holder got the ball to move both ways and savoured success for bowling in the right areas. He asked the right questions and thus he was rewarded picking up 6-42, which is now his best Test bowling figures.

Furthermore, Holder got three DRS calls right, two of which came on his own bowling. The right-arm bowler doesn’t have express under his belt but he can get the ball to move to cause trouble to the opposition. Holder mostly bowls in the corridor of uncertainty and he is accurate in his line and length.

Consequently, the seamer was able to make the most of the conditions and bamboozled the England batsmen.

On the other hand, Holder has a solid batting technique and he feels that his job is not done in the ongoing Test against England. The right-hander added that he has ticked one box whereas one more tick remains to be checked.

Jason Holder said in the press conference, “My Test match is far from over. I’ve still got a massive contribution to make with the bat, and that’s where my focus is going to be channelled now in this innings. One of the things I’ve always strived to do… was to score a hundred in England and to take a five-wicket haul here. I’ve ticked one box so far, so I guess it’s now left for me to knuckle down and try to get a hundred.”

Holder was also able to account for England captain Ben Stokes, who was looking ominous. Stokes had already been dropped twice by Kemar Roach and Shamarh Brooks on either side of lunch and it looked like the visitors would have to pay. However, Holder got the ball to move away slightly to take the outside edge of Stokes’ bat.

Subsequently, West Indies skittled out England for below-par 204 and finished the day at 57-1, trailing the host by 147 runs. Ergo, West Indies are on top and a lot of credit goes to Jason Holder and Shannon Gabriel, who took four wickets.