On This Day in 1983, India won its maiden World Cup after stunning potent West Indies 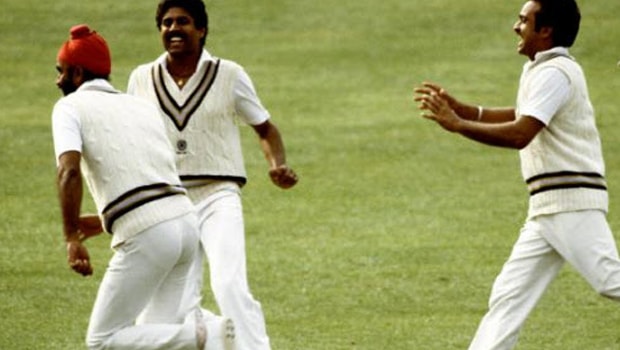 25th June, 1983 is written in the golden pages of Indian cricket. The underdog Indian team, led by Kapil Dev stunned the favourites West Indies by 43 runs in the final of the World Cup. That triumph has played a key role in revolutionising Indian cricket and it changed the game in India forever.

Not many had put their money on India but they were able to come on top in the end. The West Indies captain Clive Lloyd won the toss and decided to bowl first on a green top at the Lord’s.

India didn’t get off to a great start as they lost Sunil Gavaskar for only two runs. Subsequently, Krishnamachari Srikkanth and Mohinder Amarnath added 57 runs for the second wicket and got the team back into the contest.

India posted 183 runs and not many thought they would be able to defend the score against the potent West Indies batting line-up.

However, India knew that they had to get quick wickets if they were to stay in the battle. They got a perfect start when Gordon Greenidge shouldered arms against the inswinging delivery from Balwinder Sandhu. Desmond Haynes and Viv Richards then added 45 runs to get West Indies back on track.

Haynes was dismissed by Madan Lal but the big wicket of Viv Richards was the turning point of the match. India’s captain Kapil Dev ran backwards to take a stunner to put India noses in front. The West Indies captain Clive Lloyd could also score eight runs and the Windies kept losing wickets at regular intervals.

Jeff Dujon scored 25 whereas Marshall scored 18 to put some fight but the West Indies could only manage 140 runs. Consequently, India lifted their maiden World Cup after Mohinder Amarnath plumbed Michael Holding in front.

Mohinder Amarnath was awarded the Player of the match for scoring 26 runs and taking three wickets.