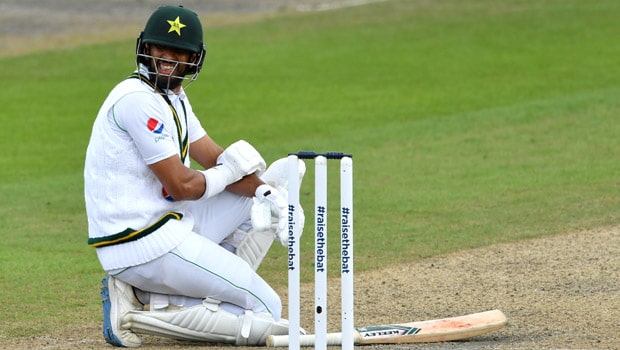 If day one was good for Pakistan, day two turned out to be even better. Shan Masood scored a brilliant 156 to take his team to 326 and then the fast bowlers and Yasir Shah collectively took four wickets to leave England at 92-4, as the hosts still trail by 234 runs.

Meanwhile, it was a perfect start of the day for England and they also dominated the first session. James Anderson struck in his first over from Brian Statham end when he invited the drive from Babar Azam and the right-hander went for the bait. It got an outside edge of the bat through to Joe Root and Azam could not add to his overnight tally of 69 runs.

Asad Shafiq and Mohammad Rizwan were then dismissed in quick succession by Broad and Woakes respectively. Pakistan could not make the most of the good first day and lost three wickets for 48 runs in the opening session.

However, after the lunch break, there was a peculiar strategy adopted by England captain Joe Root. Eight overs were left for the new ball and Root decided to bring himself on along with Dom Bess – to rush to the new ball when Pakistan was under the cosh.

Shadad Khan, who had joined forces with Shan Masood, then was able to get his eye in before the new ball was taken by Root. It was a strange call from Root as England are playing with four fast bowlers in their playing XI and Root should have given the ball to at least one of them, with Bess.

Khan and Masood frustrated the England bowlers as they followed the plan of ‘tap and run’. Both the batsmen were brilliant with their running and added salt to the injury of England bowlers. Khan and Masood kept rotating the strike rate and scored at an impressive rate. Masood, who had shown all the patience on the opening day was making the most of his chance and kept the scoreboard ticking.

The southpaw soon reached his fourth Test century- when he rushed back for two – which was Masood’s third successive Test century. Subsequently, it was time to change the gears and Masood did that perfectly. The left-hander got two boundaries against Bess and brought up the 100-run partnership with Shadab Khan.

However, Khan could not get to his fifty as he miscued a  big shot against Bess. Yasir Shah was then dropped by Jos Buttler when he was on five runs, as the England wicket-keeper continued to have a bad Test match behind the stumps. The drop didn’t cost England much as Jofra Archer plumbed Yasir in front of the wicket and then had Mohammad Abbas edged to Joe Root on the first ball.

With Pakistan eight down, it gave a license to Masood to show his attack game. The southpaw got 16 runs off one over of Bess and took Pakistan over the 300 run-mark, moving from 100 to 150 off just 61 balls. The left-hander’s knock was finally ended by Stuart Broad when he was trapped in front of the wickets and Pakistan’s innings was wrapped up on 326.

Pakistan had a perfect start as Shaheen Shah Afridi plumbed Rory Burns in front with an inswinger before setting him with the outswinger. Burns was given not out by the on-field umpire but Azhar Ali was able to get his review right. Mohammad Abbas then scalped two quick wickets as he first plumbed Dom Sibley, who went for the review, only to waste it.

Ben Stokes, England’s crisis man, was dismissed without troubling the scorers when he charged Abbas but was bowled as the ball moved away to hit the top of off-stump. These early wickets left England in dire straits at 12-3. However, some of the rebuilding work was done by Joe Root and Ollie Pope, who added a 50-run partnership.

But as soon as the 50-run stand was completed, Root tried to cut a ball from Yasir Shah, which was a tad fuller in length. The England captain got a faint edge and Rizwan took a sharp catch.