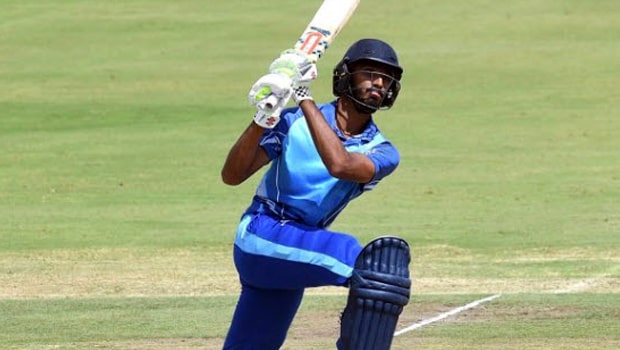 Karnataka batsman Devdutt Padikkal has made everyone sit up and notice his performances in the recent limited overs tournament this season. The 19-year-old finished as the highest run-getter during the Vijay Hazare Trophy and the recently concluded Syed Mushtaq Ali Trophy as well.

Padikkal scored 609 runs in 11 innings during the 50-over Vijay Hazare tournament at an excellent average of 67.66 and he smashed 580 runs in 12 innings during the Syed Mushtaq Ali T20 tournament as well, at an outstanding average of 64.44 once again. And now, it looks like the teenager has carried that form into first-class cricket too as he scored 78 runs on Day 1 of Karnataka’s Ranji Trophy opener against Tamil Nadu on Monday.

His first-class record his something that Padikkal is looking to improve upon this season. He made his debut in this format last season but came up with a below par performance as he averaged only 25.80 in five matches with a total tally of 258 runs. Everyone saw glimpses of his talent last season as he scored three fifties during that period but consistency and sense of responsibility were missing somewhere.

But it looks like this season is going to be a pretty big one for Padikkal. His knock of 78 came when Karnataka seemed to be in all sorts of trouble with the score reading 88 for 3 after the loss of big guns like Mayank Agarwal and Karun Nair.

Padikkal showed grit and determination as he shunned his attacking instinct to dig in and then, dig his team out of trouble. His knock of 78 came off 182 deliveries and that shows the patient approach to his innings. He was also involved in a 116-run stand for the fourth wicket with Pavan Deshpande. Padikkal did get a couple of lives during the course of his innings, both of which came quite early, but he ensured that he made those opportunities count.

His efforts saw Karnataka off to safety as Padikkal occupied the crease for over 40 overs along with Deshpande. Yes, he couldn’t reach the three-figure mark but he would be eager to get his maiden first-class ton in the very next innings he plays. Karnataka were finally bowled out for a total of 335 runs and Padikkal ended up as their top scorer during the innings.