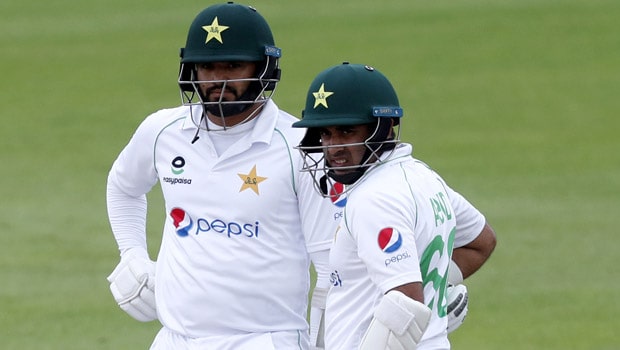 It was a frustrating day for England bowlers as only 56 overs were possible. Pakistan batsmen – assisted by rain – kept their team in the hunt for drawing the Test match. The visitors lost only two wickets for 100 runs on the penultimate day of the Test match and with their in-form captain Azhar Ali remaining unbeaten on 29 runs, they will have a good chance to draw the Test match.

England’s pack leader James Anderson took one wicket to inch closer to the Mt. 600 but would have to sleep while being one wicket short of the landmark, which is never achieved by a fast bowler in the Test fold.

England could have had a perfect start to the day when Shan Masood went for a drive through the covers but could only manage an outside edge when he was on three. However, Jos Buttler who was brilliant in the first innings, shelled a regulation catch. Anderson’s frustration continued as this was the fourth catch which was dropped off his bowling.

Pakistan openers – Shan Masood and Abid Ali showed all the resistance and patience to successfully play out the first hour of play before the drinks were taken. The tourists added 34 runs in the 15 overs without any damage in the wickets column. Soon after the first drinks break of the day, it got murkier and rain gods came to the rescue of Pakistan.

It soon started raining cats and dogs as there was a delay of almost four hours as early tea was taken. 52 overs were to be bowled in the final session of play but they couldn’t be completed as bad light stopped play, which eventually led to stumps.

England got the much-needed breakthrough when Shan Masood decided to offer no shot against Stuart Broad and the ball just clipped his back pad. Michael Gough gave the benefit of doubt to the bowler as no shot was offered.

However, Abid Ali and Azhar Ali got a good partnership going as they both of them played with solid defence. The pitch was absolutely flat and there was hardly any assistance for the hosts’ bowlers.

England bowlers tried every trick in their bag but it didn’t pay any rewards. Dom Bess was not accurate in his line and length to the right-handers and didn’t hit the right areas often to trouble the batsmen.

Stuart Broad tried the short-pitch ploy but it was of no avail. However, it was England’s pack leader James Anderson who finally got his 599th scalp when he got the ball to nip back into Abid Ali to trap him in front of the wickets. Ali reviewed but the decision stood at umpire’s call as the ball was clipping the top of the leg-stump.

Bad light then forced Joe Root to bowl alongside Dom Bess before the umpires declared that the conditions were not suited for any further play. Rain is once again expected on the final day and it can help Pakistan draw the Test match.