Pakistan get a draw after James Anderson’s 600 wickets 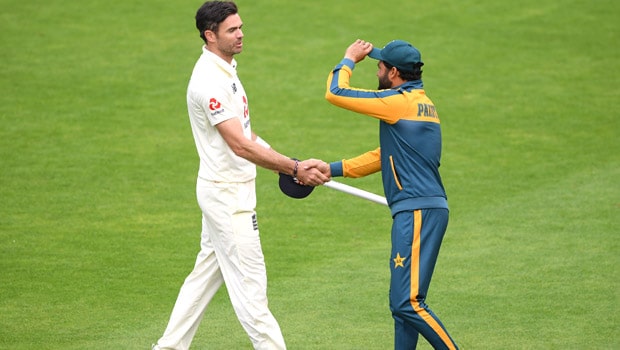 As expected, rain delayed the start of the fifth day of the third Test match between England and Pakistan at Ageas Bowl, Southampton. It took more than five hours for the play to resume and the possibility of England’s win looked bleak as only 42 overs were a possibility. However, the match ended in a draw as Pakistan kept England bowlers at bay.

James Anderson didn’t have to wait long though, to get to his 600th wicket when he extracted extra bounce from the surface to get an outside edge of Pakistan’s captain Azhar Ali’s bat. Anderson thus became the first fast bowler to take 600 Test wickets and he joined the likes of Anil Kumble, Shane Warne, Muttiah Muralitharan in the 600 club.

It was a big achievement for the England’s pack leader as he got the much-needed wicket. However, nothing much happened as the track was still flat. In a bid to get to the new ball faster, Joe Root decided to bowl himself with Dom Bess.

In fact, England thought that they might not be able to get a result out of the match as Root gave Dom Sibley the ball, who struggled to bowl from within the crease and thus bowled two no-balls.

Just before the new ball was available, Joe Root was able to dismiss Asad Shafiq with substitute fielder James Bracey taking a good low catch at short-leg. It raised a tiny ray of hope for the hosts as 18 overs were still left in the day.

However, Babar Azam, Pakistan’s best batsman was at the crease and he cruised to another strokeful fifty. Azam looked to score his runs throughout as once again showed his class.

Stuart Broad had bowled only one ball after umpire Michael Gough had signalled for the last one hour’s play, when Joe Root decided to shake hands with the Pakistan batsmen.

James Anderson led his team off the ground as he received congratulatory messages from his teammates and the opposition on reaching 600 Test wickets.

England won the three-match series by 1-0 as they had won the first Test by three wickets. Zak Crawely was awarded the Man of the match for his 267 whereas Jos Buttler was awarded the Player of the series award as he scored 265 runs in the series.