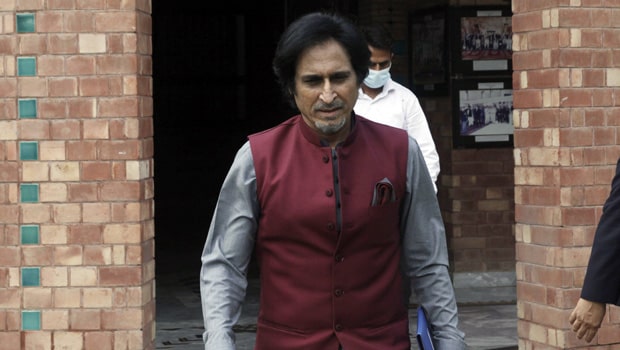 Newly appointed Pakistan Cricket Board (PCB) chief Ramiz Raja believes that cricketing ties with India can be improved. Although he’s aware of the difficulties of that process, he’s sure that bilateral series between the two countries can be resumed once again if ‘politics’ is kept away from the sport. The former Pakistan cricketer and commentator also added that it would involve a lot of work.

The two nations haven’t played bilateral cricket against each other since early 2013! The only time India and Pakistan collide these days is during ICC events as was the case on October 24. On that occasion, Pakistan led by Babar Azam, Mohammad Rizwan, and Shaheen Afridi defied history and managed to beat the Men in Blue in a World Cup match for the first time. Pakistan’s 10-wicket victory followed by another resounding win over New Zealand has made sure that they take firm control of Group 2 in the Super 12 stage.

One of the first questions Ramiz Raja was asked when he was appointed to the post of PCB chief was whether there is a possibility for India and Pakistan to resume bilateral cricket ties. A month ago he had answered, “Impossible right now. The sporting model has been spoiled by politics and right now it is a status quo and we are not in a hurry on this issue because we have to focus on our domestic and local cricket.”

However, the recent change in Raja’s remarks may have something to do with his meeting with BCCI President Sourav Ganguly and secretary Jay Shah that took place on the sidelines of the Asian Cricket Council (ACC) earlier this month.

An official press release shared by PCB regarding the meeting read: “I met with BCCI President Sourav Ganguly and secretary Jay Shah on the sidelines of the ACC meetings. We need to create a cricketing bond, while I have also believed that politics should stay away from sport as much as possible and this has always been our stance.”

“A lot of work needs to be done to revitalise Pakistan-India cricket but there needs to be some comfortable level between the two boards and then we can see how far we can go. So overall, we had a good discussion.”

It also goes without saying that cricketing ties involving India and Pakistan also have their fair share of off-field controversies. Fanatic nationalism from both sides end up reducing the sport to a fierce rivalry and the aftermath of last Sunday’s match with former cricketers from both countries resorting to making distasteful remarks is a testament to the same.