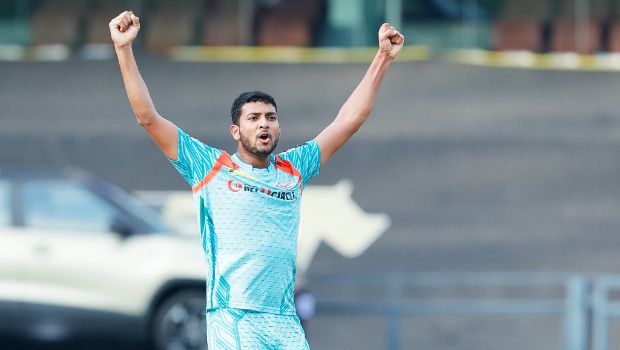 Lucknow Super Giants captain KL Rahul was full of praise for left-armer seamer Mohsin Khan, who has impressed while playing for the franchise in the last couple of matches.

Khan has impressed with his extra pace and bounce and he has breathed down the neck of not only opposition batters but also his teammates who have found it difficult to play him in the nets.

Khan returned with impressive figures of 4-16 in his quota of four overs while playing against Delhi Capitals at the Wankhede Stadium, Mumbai on Sunday to help his team win by six runs.

The lanky pacer was right on the money and accounted for in-form David Warner, a well-settled Rishabh Pant, a dangerous Rovman Powell, and Shardul Thakur, who has the skills to turn the game on its head.

The left-armer was associated with Mumbai Indians in the previous seasons but didn’t get his opportunities. However, he has grabbed every single one of them while playing for LSG.

The tall fast bowler from Uttar Pradesh has bowled accurately at both ends of the innings and he has reaped rewards for the same. Rahul stated that Mohsin Khan has got a good brain on his shoulders and he knows how to use his variations.

KL Rahul said in the post-match presentation, “Mohsin Khan) has been brilliant, played him in the nets first time a month ago … didn’t want to face him, seriously. He was sharp, he’s scary at times in the nets. It’s not just the pace, he has a good brain, has a bit of skill as well, has a great slower one and he knows when to use them.

Eager to learn, and eager to play, obviously he’s been around with the teams for the last 2-3 years, but he hasn’t got a chance, he was very eager to play and he’s been a confident guy. Even under pressure, he’s bowled some really big overs for us and he’s performed for us. Hopefully, he can learn, get better, get confident, and keep doing the job for us.”

On the other hand, Rahul also lauded Deepak Hooda, who has been in sensational form for Lucknow Super Giants in the ongoing season. Hooda scored a quickfire knock of 52 runs from 36 balls to help his team post a par score of 195 runs against DC.

Rahul added, “Hooda has been batting well, he’s batted well throughout the season. He started off really well. Even when the team is under pressure, he’s really played smart cricket. It’s not just about going there and hitting fours and sixes, he’s been smart, he’s read the situation really well. Really a hard-working guy, I’ve seen him for the last 3 to 4 years in the previous franchise as well. Really happy that he’s getting those runs for the team when the team needs it. He’s putting his hand up, taking the responsibility, and doing the job for the team.”

LSG will next face KKR at the MCA, Pune on Saturday.