IPL 2022: Idea was to hit the stumps and it worked well for me – Umran Malik 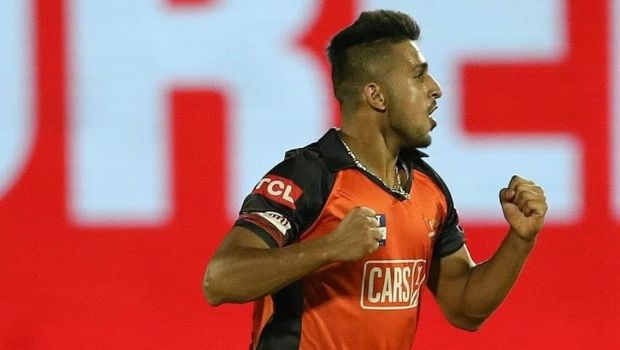 Sunrisers Hyderabad gun fast bowler Umran Malik has been the cynosure of all eyes in the ongoing season of the IPL. Malik has hogged the limelight with his express pace as he is sending down rockets at the batters.

The 22-year-old youngster from Jammu and Kashmir came up with his best bowling performance in the tournament as he returned with figures of 5-25 in his quota of four overs against Gujarat Titans at the Wankhede Stadium, Mumbai.

In fact, these are the best bowling figures of the season as well. Malik bowled fast and accurately against the Titans and reaped rewards for the same. Out of his five dismissals, four were bowled as he beat the opposition batters with his searing pace. Malik first accounted for Shubman Gill and then welcomed Hardik Pandya with a scorching bumper.

The ace pacer got the crucial wicket of the GT captain with a well-directed bouncer and then dismissed a well-settled Wriddhiman Saha with a brilliant 153 kmph yorker. Subsequently, Malik accounted for David Miller and Abhinav Manohar to put his team’s noses in front.

However, Malik’s heroics with the ball went in vain as GT was able to chase down 196 runs after Marco Jansen couldn’t defend 22 runs in the final over against Rahul Tewatia and Rashid Khan.

Umran Malik was awarded the Player of the Match for his fine performance with the ball. He said after the game, “I always bowl fast but I’ve been trying to bowl better lines and lengths. Plan was to rotate my plans. Idea was to attack the stumps and it worked well for me. 155 (kph), hopefully, it happens, but the main goal is to bowl well and pick wickets for my team.”

On the other hand, Rashid Khan kept his nerves to hit 15 runs off the last four balls against Marco Jansen. The Afghanistan all-rounder smashed three sixes to get his team to a thrilling victory.

Rashid Khan said after the game, “Feels good, to go there and have that self-belief and keep my shape stronger and hit it. Happy to deliver against them (SRH), just trying to play my game and have that belief in my batting which I’m working from the last two years. When it was 22 left. I just told Tewatia that we have given 25 in the last over with one of our best bowlers bowling and I told him that we needed to have that belief and not panic, anything is possible. Just stay there, keep your shape, and hit it strong and that was the plan (with Tewatia). I have bowled 4-5 bad deliveries which have been punished and that is something I had in my mind, you can’t miss your line and length on a wicket like this. It was a good wicket to bat on, but still, we did well to restrict them to 196.”

GT will next face Royal Challengers Bangalore at the Brabourne Stadium, Mumbai on Saturday.