IPL 2022: Improved my off-stump game before the start of season – Rahul Tewatia 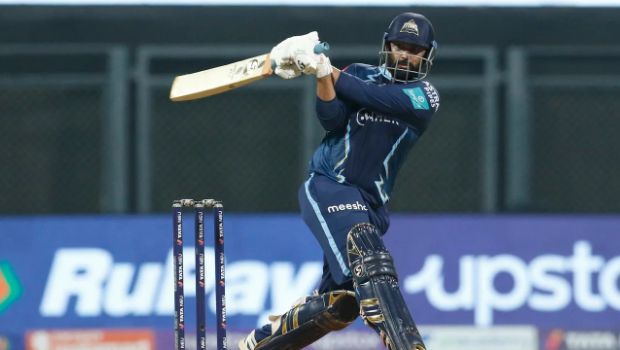 Gujarat Titans all-rounder Rahul Tewatia has revealed that he improved his off-stump game before the start of the season.

Tewatia has done an amazing job as a finisher for the franchise in the ongoing season and has batted at the top of his game.

In fact, it is well known that the left-hander has a potent leg-stump game but he has also improved his off-side play. The southpaw has bailed his team out of the jail on numerous occasions and he has delivered the goods at the fag end of the innings.

Tewatia scored another match-winning knock of unbeaten 43 runs off just 25 balls against Royal Challengers Bangalore on Saturday and took his team over the line in the run-chase of 171 runs. Thus, he was awarded the Player of the Match for his superb knock.

In fact, Gujarat Titans were in a spot of bother at 95-4 against RCB but David Miller and Rahul Tewatia added 79 runs for the fifth-wicket alliance to get their team home. Tewatia added it is enjoyable to bat with David Miller.

“During our practice sessions, we talk about how to finish a game at the end and what we can plan. Finishing the game in the middle with him is enjoyable,” said Tewatia of his partnership with Miller.

“I had improved my off-stump game quite a bit from the start of the IPL and hit quite a few shots. Because bowlers had begun planning and keeping the field outside off stump, so I thought that if I can hit my shots in the gap, I can get boundaries there too. So I could open up the game on both sides,” said Tewatia.

“You have to play pre-planned shots in the death overs, but I certainly see the field. But at the end, you have to just see the ball and hit it. So I try to hit it on the offside if it’s outside the off-stump. If its on the leg-stump, that is my area, so I shouldn’t miss out,” he elaborated.

Tewatia added that he tries to keep his calm in the tense situations of the game and it helps him in delivering the goods.

“I can’t say I am cool, I just appear cool. But inside, there’s lots going on in the mind – when do I start executing what I’ve planned, which bowler should I take a chance on. I think of lots of things and follow the plans I’ve set after that thinking.”

Gujarat Titans have now won eight of their nine matches and look all set to qualify for the playoff stages.