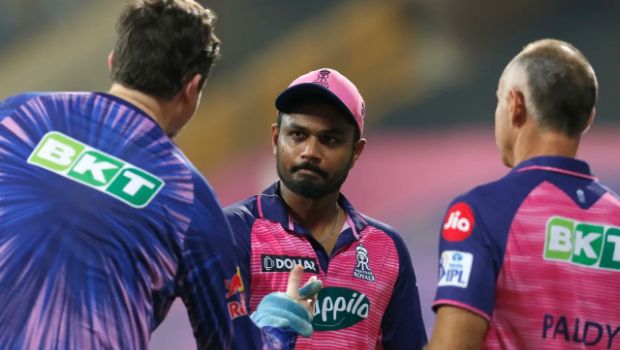 Samson has been in decent form in the ongoing IPL while leading the inaugural champions but he hasn’t been able to make the most of it.

Samson got off to another promising start as he scored 27 runs from 21 balls against Royal Challengers Bangalore at the MCA, Pune on Tuesday. But the flamboyant batter was dismissed by Wanindu Hasaranga when he attempted to play a reverse sweep.

In fact, it has been noticed that Samson has been inconsistent and he hasn’t been able to make the most of the talent he has.

Samson has scored 228 runs in eight matches for RR in the ongoing season at an average of 32.57 and a strike rate of 165.21. Meanwhile, Samson had last played for India back in July 2021 when a second-string Indian team had toured Sri Lanka.

Thus, there is no doubt that the batsman from Kerala needs to be more consistent in order to put his hat in the ring for the T20 World Cup squad selection.

“That Sanju is wasting good form and good opportunity to score runs to press for an international recall, to lead his team when Jos Buttler doesn’t score,” Bishop said on ESPNcricinfo’s ‘T20 Time Out’.

“It’s not that Sanju’s out of form. But that’s a match-up with Wanindu Hasaranga and him, and he should have known better. He got out of the blocks quite nicely,” Bishop said.

Bishop added that he is a big fan of Sanju Samson’s batting but feels the batter is wasting his talent by poor shot selection.

On the other hand, former New Zealand skipper Daniel Vettori reckons the game comes too easy to Sanju Samson but the right-hander tries to do too many things while batting, which leads to his downfall.

“It feels like the game is too easy for him, so ‘I’m going to try something different, I’m going to try and make sure I can play every shot in the book’. He is at his best when he’s striking down the ground,” Vettori said.

“He’s a joy to watch when he’s playing that well. But everything looks a little bit easy and sometimes it feels like he isn’t in the moment, and then he’s out.”