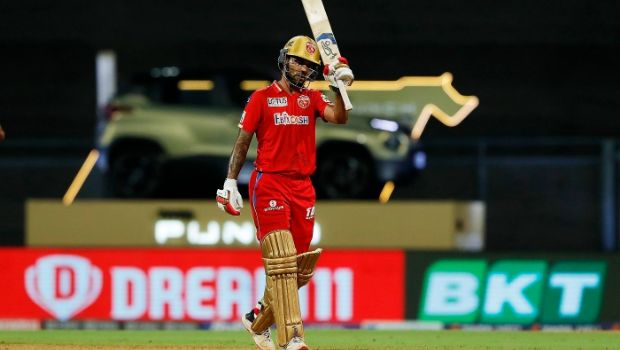 Former Indian head coach Ravi Shastri lauded Shikhar Dhawan for his consistency. Dhawan has definitely improved his T20 game manifold in the last couple of seasons and the same is palpable in his performances.

Dhawan scored a match-winning knock of 88 runs off just 59 balls against Chennai Super Kings at the Wankhede Stadium, Mumbai on Monday while playing his 200th IPL game.

The left-hander took a bit of time in the initial phase of his innings and then changed gears towards the end. Dhawan once again relied on his timing to score his runs and built his innings in his typical fashion to help his team post 187 runs on the board.

Dhawan also became the first batter to score 1000 runs against Chennai Super Kings and surpassed Rohit Sharma’s record of scoring the most runs against a particular IPL opposition. Sharma has 1018 runs against KKR whereas Dhawan has now amassed 1029 runs against CSK.

“Shikhar Dhawan measured what he had to do by reading the conditions,” Shastri told Star Sports. “He (Dhawan) is seeing what the pitch had to offer, he is seeing what his role was.. his shot-selection, playing around with the fields, choosing the right bowlers to hit and the reason why I said he spoke beautifully (at the post-match presentation ceremony) was that it showed his thought process.

“This man (Shikhar Dhawan) has been a serious player, you know, right in between them when he has been fit and he deserves all the accolades. 6000 IPL runs, 200th (IPL) game, man-of-the-match, finishing it off in style and like he said he has started advising youngsters now and I know Shikhi. He might be calling them and playing the flute. I hope he plays the flute for a long time.”

Dhawan has been in decent form as he has scored 302 runs in eight matches for PBKS in the ongoing season. The veteran left-hander will look to continue the good show.

The Mayank Agarwal-led team will next face Lucknow Super Giants at the MCA, Pune on Friday.