Home » Cricket » Premier League 2022 » IPL 2022: Virat Kohli has experienced these highs and lows, he will emerge out of this – Sanjay Bangar

IPL 2022: Virat Kohli has experienced these highs and lows, he will emerge out of this – Sanjay Bangar 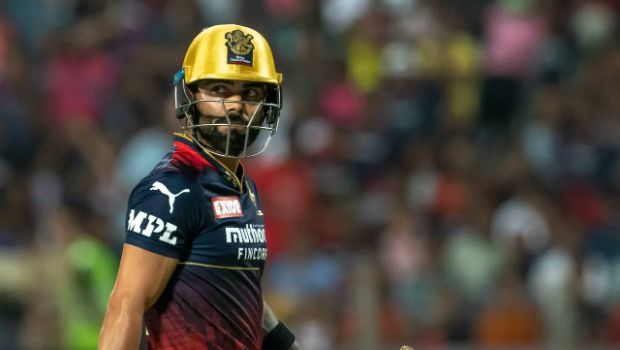 Royal Challengers Bangalore head coach Sanjay Bangar has put his weight behind Virat Kohli to bounce back stronger from the poor run of form.

Bangar added that Kohli has experienced these highs and lows in his long career and he will strongly emerge from this.

Kohli was promoted as an opener against Rajasthan Royals at the Maharashtra Cricket Association Stadium, Pune but he was not able to get going. The talisman had a lucky escape in the first over itself as the ball bounced just before Daryl Mitchell at square leg.

However, Kohli’s luck soon ran out as he got a bottom edge which ballooned to Riyan Parag at point after he had scored only nine runs. This was Kohli’s fifth single-digit score of the season as he has failed to get going. Kohli has managed only 128 runs in nine matches at an average of 16 and a strike rate of 119.62 in the ongoing season.

Kohli has looked at sea while batting as he is only finding the edges and the same confidence, which has made him a great player, seems to be missing. However, Kohli has seen such lows in his career and there is no doubt that he will bounce back stronger.

Sanjay Bangar feels early top-order wickets pushed them on the backfoot against Rajasthan Royals on Tuesday.

“We’ve all seen that negotiating the new ball is a challenge for most of the teams,” Bangar said. “Whenever we lose early wickets, we sort of lose them in clusters and that’s what is pulling the team back and [we are] rightly [losing] games that we should have won. That’s why we are not able to finish the job.

“Regarding Kohli’s form, he’s a great cricketer. He’s experienced these highs and lows many times before. I’ve observed him from close quarters. He has the spirit and he’ll emerge from these run of low scores in the last few games. In the coming crucial games, he’ll help us win,” Bangar added.

“We aren’t talking about anything different [in practice], to be honest. The way he prepares, he always puts himself out of his comfort zone and prepares and that’s his specialty. This is why he can emerge from tough situations and his attitude his commendable. Yes, he’s had a low run of scores but he is so mentally strong, he’ll be able to put in a better performance.”

Bangar added that they are a team that is not dependent on one individual for the bulk of their runs. The head coach added almost everyone has contributed when the team has won.

“That’s what we’re really looking to develop so that anyone on his day can rise to the occasion and win the game for the team. We’ve already seen glimpses of Shahbaz [Ahmed] who can do that. DK [Dinesh Karthik], Faf, and even Maxwell have done it. Wickets have been difficult to bat in the first six overs and most top-order batters have struggled. But if we get that thing right, you’ll certainly see better performances from us.”