Home » Cricket » Pujara and Rahane still have a lot to offer, if they change their mindset: Dilip Vengsarkar

Pujara and Rahane still have a lot to offer, if they change their mindset: Dilip Vengsarkar 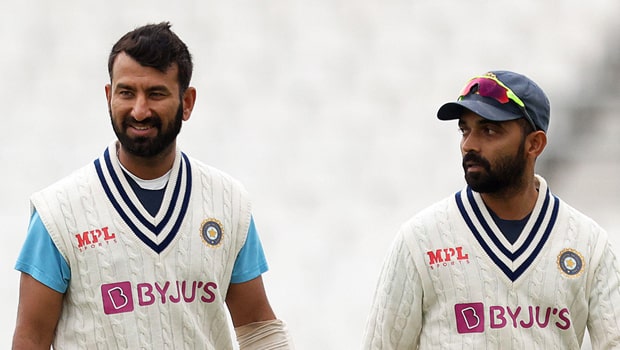 Former India skipper Dilip Vengsarkar believes that Cheteshwar Pujara and Ajinkya Rahane need to change their mindset in order to get back amongst the runs.

Both Pujara and Rahane have been struggling to score big runs consistently for a couple of years now. That continued even in the first innings of the ongoing second Test against South Africa at Johannesburg. Pujara was out for a score of 3 after facing 33 balls whereas Rahane was out for a golden duck.

However, Pujara undertook an attacking approach in the second innings and finished Day 2 on an unbeaten 35 off just 42 balls. Rahane was also unbeaten on 11 and both were looking to play their shots.

“Unfortunately for Pujara, he plays only in the longer format and by not improvising while at the crease and going into his shell, he builds enormous pressure upon himself to perform,” Vengsarkar was quoted as saying by The Times of India.

“Rahane, on the other hand, I feel is getting too much into the technicalities when his focus should be to score runs. He looked good in the first innings of the first Test but he needs to get out of that mental block of looking technically good instead of looking for gaps in the field and scoring runs,” he added.

Vengsarkar also mentioned that they play only in one format and age isn’t on their side either. Younger players like Ruturaj Gaikwad and Shubman Gill will eventually take their places but he thinks that the veteran duo still have a lot to offer if they can change their mindset and the way they score their runs.

“There are younger players like Ruturaj Gaikwad and Shubman Gill, who would eventually take their places, but I believe Pujara and Rahane still have a lot to offer at the highest level, only if they change their mindset,” Vengsarkar said.

India are in a very tricky situation in the second Test right now. They have a 58-run lead with eight wickets in hand and three more days to go. But the surface is tricky and they need more runs on the board to put South Africa under pressure. India won the first Test match in Centurion convincingly and a win here will help them in sealing the series.