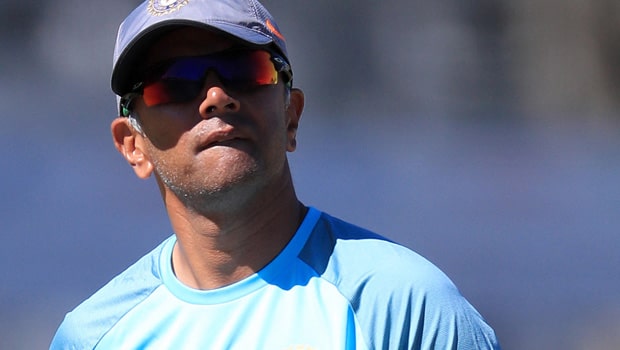 India almost had the win in the bag for the first Test against New Zealand in Kanpur, but the lack of overs didn’t make it possible. The Kiwis resisted with just one wicket remaining on Day 5 and managed to grind out a draw.

Following the draw, India’s slow batting approach on Day 4 came under the scanner. Several experts and fans questioned India’s late decision to declare which prevented the side from having sufficient overs in which to bowl out New Zealand.

However, head coach Rahul Dravid feels otherwise. He feels that India were under pressure throughout the day and the batting they strategy they execute was the best option for that moment. “That’s not my reading of the game. Half an hour before we declared, we were under pressure. All three results were possible. Wriddhiman Saha showed great courage and character to be batting with a stiff neck. (But) If we had lost our last three wickets quickly and they were chasing 240-250 with approximately 110 overs, then they are looking at 2.2 or 2.3 runs an over,” he said.

On Day 5, New Zealand lost their ninth wicket in the 90th over. However, the pair of Rachin Ravindra (18* off 91 balls) and Ajaz Patel (2* off 23 balls) managed to withstand 8.4 overs of pressure from the Indian bowlers to secure a draw in the first Test.

Rahul Dravid further opined that India timed their declaration on Day 4 appropriately. They wanted to make sure the dangerous period was over before declaring and that’s exactly what was asked of the batters.

“We needed that partnership (between Saha and Axar Patel) we got. We lost Shreyas (Iyer) just before Tea and then we had that partnership. From 167 for 7 to get to 234 for 7 was absolutely necessary. As you saw, this wicket is really flat. If it was turning square and bouncing, that would have been a different situation,” Dravid added.

India may not have been able to secure the win in Kanpur, but it was an unforgettable experience for Ravichandran Ashwin. The off-spinner went past Harbhajan Singh’s tally of 417 Test wickets and is now the third-highest wicket-taker for India in the purest format of the sport.

“Harbhajan Singh was a really fine bowler, someone I played a lot of cricket with. What Ashwin’s done to go past him in just 80 Tests is a phenomenal achievement. Ashwin has been an absolute match-winner for India. Even in this Test, the way he pulled us back on that third morning with that spell of 11 overs was phenomenal. Today, just to keep us alive in the game, constantly be threatening on wickets like this, is a tribute to his skill and ability,” Dravid mentioned.