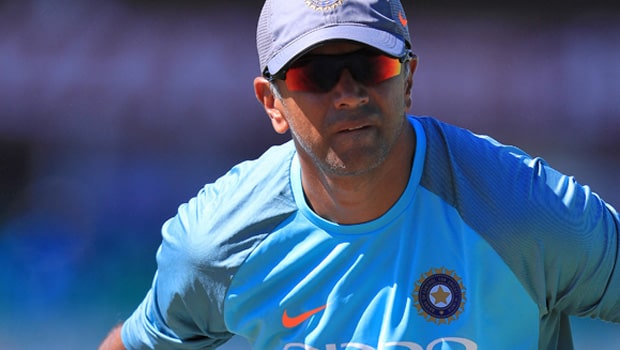 Having already been heavily labelled as the successor to Ravi Shastri as the coach of Team India, Rahul Dravid has formally applied for the position on October 26. Ravi Shastri and his staff comprising bowling coach Bharat Arun and fielding coach R Sridhar will be departing after the conclusion of the ongoing T20 World Cup.

It was widely reported after the IPL 2021 final that Rahul Dravid had met former teammate and current BCCI President Sourav Ganguly as well as Secretary Jay Shah. During their meeting, Dravid is assumed to have accepted Ganguly and Shah’s offer to take up the coaching job of the men’s senior team and The Wall might be seen along with the team as early as India’s trip to New Zealand which begins right after the World Cup final. The T20I team will also have a new captain as Virat Kohli has already announced his intention to step down as captain following the World Cup. Vice-Captain Rohit Sharma is expected to be his successor.

Along with Dravid, former pacer Paras Mhambrey as well as former wicketkeeper Ajay Ratra have applied for the positions of India’s bowling and fielding coaches. They are expected to replace Arun and Sridhar’s respective departments. Abhay Sharma, who has previously worked with Rahul Dravid at the NCA had also applied for the role of fielding coach.

“Yes, Rahul has formally applied today as it is the last day of the deadline. His team at the NCA, bowling coach Paras (Mhambrey) and fielding coach Abhay (Sharma) have already applied. His application was just a formality,” a senior BCCI official told PTI on Tuesday.

The word ‘formality’ here holds a lot of value. Despite already having an agreement with Rahul Dravid over taking over the role, the BCCI has always appointed coaches by inviting applications first. Therefore, Dravid still needed to officially submit his application in order to get appointed.

Ajay Ratra who also applied on Tuesday told PTI, “It will be great if I can contribute in Team India’s success if given a chance.” The trio of Rahul Dravid, Paras Mhambrey, and Ajay Ratra have spent a lot of time with the budding generation of Indian cricketers including current stars such as Rishabh Pant, Shubman Gill, Washington Sundar, Prithvi Shaw, Shreyas Iyer, Devdutt Padikkal, Ishan Kishan, and Mayank Agarwal among others.