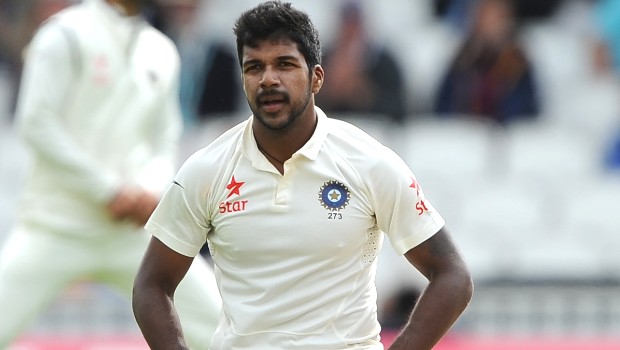 India’s out of favour fast bowler Varun Aaron rated former skipper Rahul Dravid as the toughest batsman he has ever bowled to. Aaron was well known to clock speed in excess of 140 km/h but he said that Dravid made it look like he was bowling at 120 km/h. Varun added that Dravid would just lunge forward as if the bowler is throwing down and it was irritating to bowl to someone like him as he hardly stood a chance against him.

Dravid hardly had any chunk in his armour and he was really difficult to dismiss. The right-hander had a solid defense and it was not an easy task to go past the Wall. The Karnataka batsman was known to tick the right boxes in his batting and he was one of the most difficult batsmen to dismiss.

Meanwhile, Aaron’s career was hampered by injuries after he made his International debut in 2011. The right-arm pacer could not cement his place in the side despite having pace under his armour.

“I would say Rahul Dravid is the toughest batsman I’ve ever bowled to,” Aaron told Ish Sodhi during a Rajasthan Royals podcast. “Every time I turned up to bowl to him in the nets, it felt like I was just bowling at 120kph. It’s just something that he does to you.”

“I have never bowled to a batsman who would lunge out to the max and play you as if you’ve just bowled a throw down to him. As a bowler that’s extremely irritating to bowl to somebody like him,” he added.

On the other hand, Varun Aaron made his Test debut against West Indies and scalped three wickets in his maiden match. The Jharkhand lad received his Test cap from VVS Laxman and added that it was the highlight of his short career.

“I think getting the Test cap for India is the highlight for any cricketer. No matter what one does after that, it is the highest point of his career,” Aaron said.