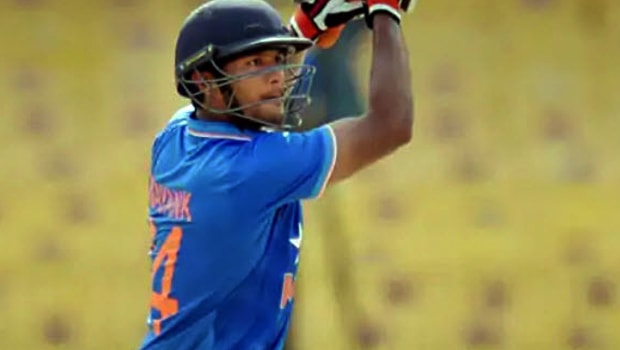 India’s Test opening batsman Mayank Agarwal credited Rahul Dravid for motivating him before the national selection. Agarwal admitted he was getting a bit restless when he was ignored by the selectors despite making a truckload of runs in the domestic circuit.

The Karnataka batsman was at his best in 2017-18 Ranji season as he finished as the highest run-getter of the tournament with 1160 runs in eight matches. The right-hander scored his runs at a stunning average of 105.45. Agarwal scored five centuries and two fifties in the season to knock hard on the selection doors.

Thus, Agarwal had ticked the right boxes in the domestic circuit and he was waiting for his big chance in the national team. However, the selectors were only delaying the inevitable.

“I was getting runs you know. I got massive runs that Ranji Trophy season and for India A. I did have a word with Rahul bhai. I told him I was getting thoughts of sometimes not getting picked,” Agarwal told Sanjay Manjrekar in a videocast on ESPNcricinfo.

It was a bit frustrating for Agarwal to not make the squad despite doing everything right in the domestic circuit. However, Rahul Dravid kept him on the right track and told him that selection is not in his hands. Dravid advised Mayank to not overthink on the selection, so that he doesn’t go into a negative mindset.

“I very clearly remember him telling me ‘Mayank these are the things that are not in your hands. You have worked hard, you have gotten here. You are as close as you can get. Selection is not in your hands’.

“And I totally agreed with him. Theoretically you understand that but practically it’s not easy.

Dravid has all the experience and he himself went through the same procedure. Hence, the former Indian skipper understood Mayank’s plight. Dravid was known to get the best out of the players at the Under-19 and India A level and has always guided the youngsters on the path of success.

“But he put forth a few things – ‘What is to say that the coming October and November is not going to be different from September. If you think otherwise you will get into a negative mind frame it’s you who is going to lose out and nobody else’. So I remembered that talk and that kept me going,” Mayank added.

“When I got the call I was elated and I called him up and thanked him.”

Mayank was ready to make the most of his opportunity when he was called for the tour Down Under in the 2018-19 series. The right-hander scored a gutsy 76 and 42 in his debut Test match against Australia at Melbourne. Ergo, all the wait was worth it for Mayank.

The Karnataka batsman was also India’s highest run-getter in the Test fold in 2019. Agarwal, who is technically sound, has so far scored 974 runs in 11 Test matches at an impressive average of 57.29 with the help of three centuries and four fifties. Consequently, he has had a perfect start to his International Test career.