Home » Cricket » Ranji Trophy: A look at the architects behind Saurashtra’s journey to the final

Ranji Trophy: A look at the architects behind Saurashtra’s journey to the final 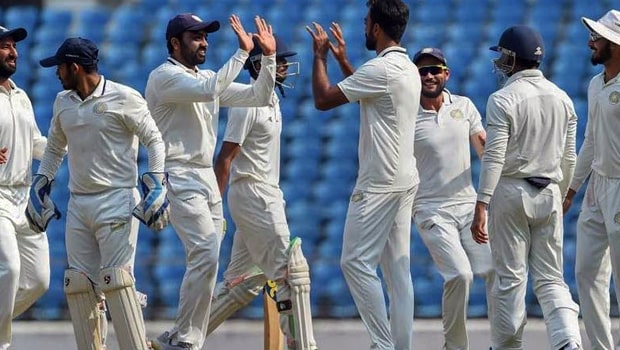 Saurashtra made it to the finals of the Ranji Trophy for the second consecutive time on Wednesday when they registered a clinical 92-run victory over Gujarat in the semifinal. It was a tense match that went on till the very last day but Saurashtra’s warriors, who had taken their team out of trouble numerous times, during the group stage stepped up once again to make the victory possible. Hence, Saurashtra have a shot at winning the title that had been eluding them once again and it wouldn’t have been possible without the following players:

Sheldon Jackson: The 33-year-old batsman is Saurashtra’s highest run-getter this season. He has amassed a total of 783 runs in nine matches at an outstanding average of 52.20. These runs include three centuries and one of them came in the first innings of the semifinal against Gujarat. Jackson walked out to bat with his side on a score of 102/2 and soon saw them getting reduced to 102/3. However, he hanged in there and played a gritty knock of 103 off 204 deliveries.

Jaydev Unadkat: The Saurashtra skipper has had a dream season with the ball. He has rewritten the record for the most number of wickets by a pacer in a single season of the Ranji Trophy with his tally of 65 wickets so far. Moreover, he has registered seven five-wicket hauls this season as well, one of which came in the fourth innings of the recently concluded semifinal against Gujarat. Unadkat’s spell of 7 for 56 totally broke Gujarat’s back and powered Saurashtra to their second final since last year.

Arpit Vasavada: The 31-year-old has been the second highest run-getter in this season for Saurashtra. Vasavada has scored a total of 654 runs this season at an excellent average of 54.50. That includes three hundreds as well, one of which came against Gujarat in the semifinal once again. Although Vasavada scored a duck in the first innings, he stepped up when Saurashtra needed him the most. His innings of 139 helped Saurashtra to recover from a precarious position of 15/5 and reach a total of 274 runs.