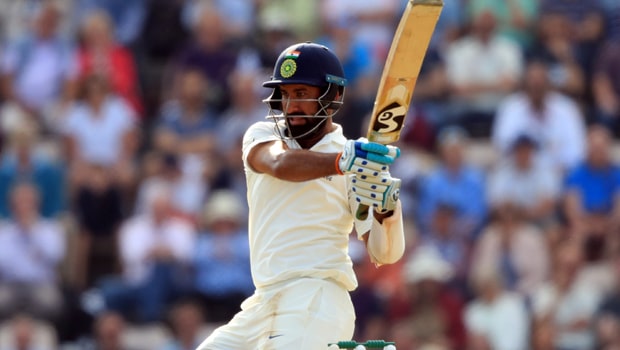 Cheteshwar Pujara before retiring gave a spectacular performance to help Bengal move closer to their first Ranji Trophy after their last final 13 years.

The batsman raised the bar against a scratchy Saurashtra in the opening day’s play in the Ranji Trophy final.

His performance was also followed by Avi Barot (54 off 142) and Vishvaraj Jadeja (54 off 92) that helped them get a high score.

Credit to Akash Deep, who also struck late in the final session to restrict Saurashtra to 206 for five at stumps on Monday.

The pacer was Bengal’s standout bowler with three wickets scalps to his credit. He cleaned out Chetan Sakariya by catching him from behind, to end the ay’s play.

In the games that the pacers did most of the work,  only 80.5 overs could be bowled.

Pujara had to retire from the game because he was ill. He couldn’t shake it off and had to walk off the field after scoring five from 24. His runs had put Bengal in bothering spot after Barot (54 off 142), and Jadeja (54 off 92) had to their credits.

According to reports, he was forced off the field with a fever due to throat infection. The batsman recently returned from New Zealand. He is expected to return to the field the second day, according to the team’s skipper, Jaydev Unadkat.

With Bengal making their home advantage count, they are in the lead on day one.

Meanwhile,  Saurashtra batsman Vishvaraj, who spoke after the game said another 100 runs on the slow pitch would be valuable.

He further stated that the semi-final surface had a lot more bounce, but the final pitch is low and slow.

While noting that the game is not a typical Rajkot wicket, he said another 100 to 150 runs would be god for his team after losing five wickets, which he said is too many at that stage.